Today we left the dock in Liverpool quite early, at about 8:30. We were delayed slightly as waited to exit through a tidal lock. Then we were on our way, out into the turbid, brown-coloured waters of Liverpool Bay where we carried out our first CTD station at about midday. 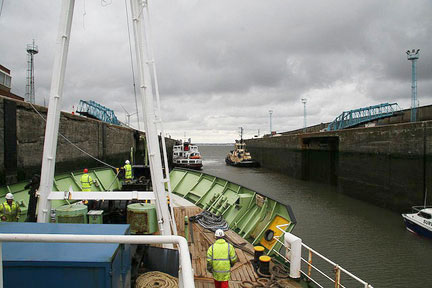 A CTD station is where the ship stops to allow a rack of bottles to be lowered down into the water. A metal frame holds the rack of bottles and also an array of instruments that measure different properties of the seawater as the rack proceeds downwards. One instrument, for instance, measures the saltiness (‘salinity’) of seawater according to how readily it conducts electricity. The technical term ‘CTD’ actually stands for Conductivity-Temperature-Depth, although in practice it has come to be used for the collection of water samples using a CTD frame. When out in the middle of the ocean the CTD metal frame can be lowered several kilometres into the water, but in Liverpool Bay the bottom was at only 15 metres depth. The time for the CTD to be lowered to the bottom was therefore very short in comparison!

Each 20-litre bottle on the rack starts with its upper and lower lids open, so that seawater easily flows through. Then, at various depths, different bottles are ‘fired’, which is to say that an electrical signal causes the lids to snap shut, trapping in a sample of the seawater from that depth. When the CTD is brought back to the surface, the rack of water bottles thus contains water samples from a range of depths. In this case, because the water was so shallow, only a few depths were sampled: 2, 4, 8 and 12 metres. 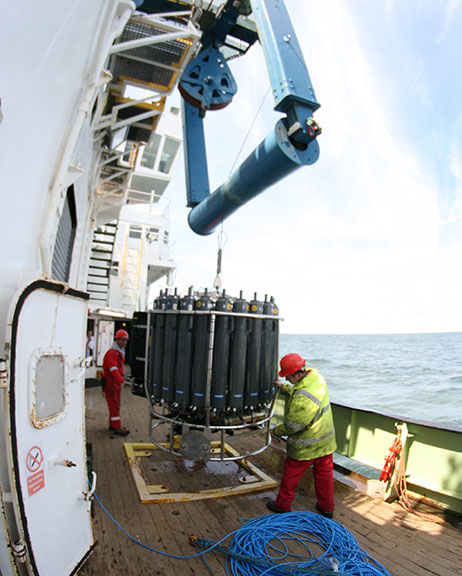 Once the CTD was raised back to the surface and winched back onto deck, scientists clustered around in order to extract water. First in the queue, because of the volatility of what they are measuring, were those who need to measure the concentrations of different gases dissolved in seawater. After this came those measuring the carbonate chemistry of the seawater (from which ocean acidity is calculated) and then those analysing the seawater samples for biology, chemistry and other aspects. Once each scientist had taken his or her requirement from the water bottle, it was carried in to the laboratories inside the ship to be measured.

Now we have steamed further north and I can see the Isle of Man out of my cabin window, while the mountains of the Lake District are visible on the other side. After our evening meal in a few minutes we will carry out our second CTD cast of the day.