ASVs are generally larger than autonomous underwater vehicles (AUVs) allowing for larger payloads and greater battery capacity. By remaining on the surface, they can employ solar or wind power to enhance or completely provide their power needs. Wave powered vehicles have been made by hobbyists since the 1950s, but these commercial craft - used for scientific research - are recent developments.

Surface vehicles pose unique challenges to the pilot, especially when working inshore or in congested waters. However they offer a variety of solutions to the problems posed. For deep water or when operating close to commercial shipping, the challenges of being seen and keeping a watch are largely met by Automatic Identification System (AIS). An AIS transponder continuously transmits the vessel’s position and some metadata on the vessel type, while receiving the same from any AIS-equipped vessel. This is relayed to the shore and allows the pilot to take a measure of avoiding action when encountering another AIS-equipped vessel. Maritime law requires all vessels over 500 tonnes to carry AIS, but that is not a guarantee of its use. Although many smaller vessels also carry AIS, the system cannot be relied upon completely, especially for yachts, fishing vessels and warships. An active radar reflector is a more direct way of being seen by larger vessels, and finally navigation lights and day-marks should be visible to vessels of all sizes. You can read about the history of the development of Autonomous Surface Vehicles here.

The NOC operates three ASVs: a Liquid Robotics SV3 Waveglider from the USA, an ASV-Global Ltd C-Enduro, and a Seiche Ltd AutoNaut. The latter two are from the UK. Each has its own specific strengths and limitations. 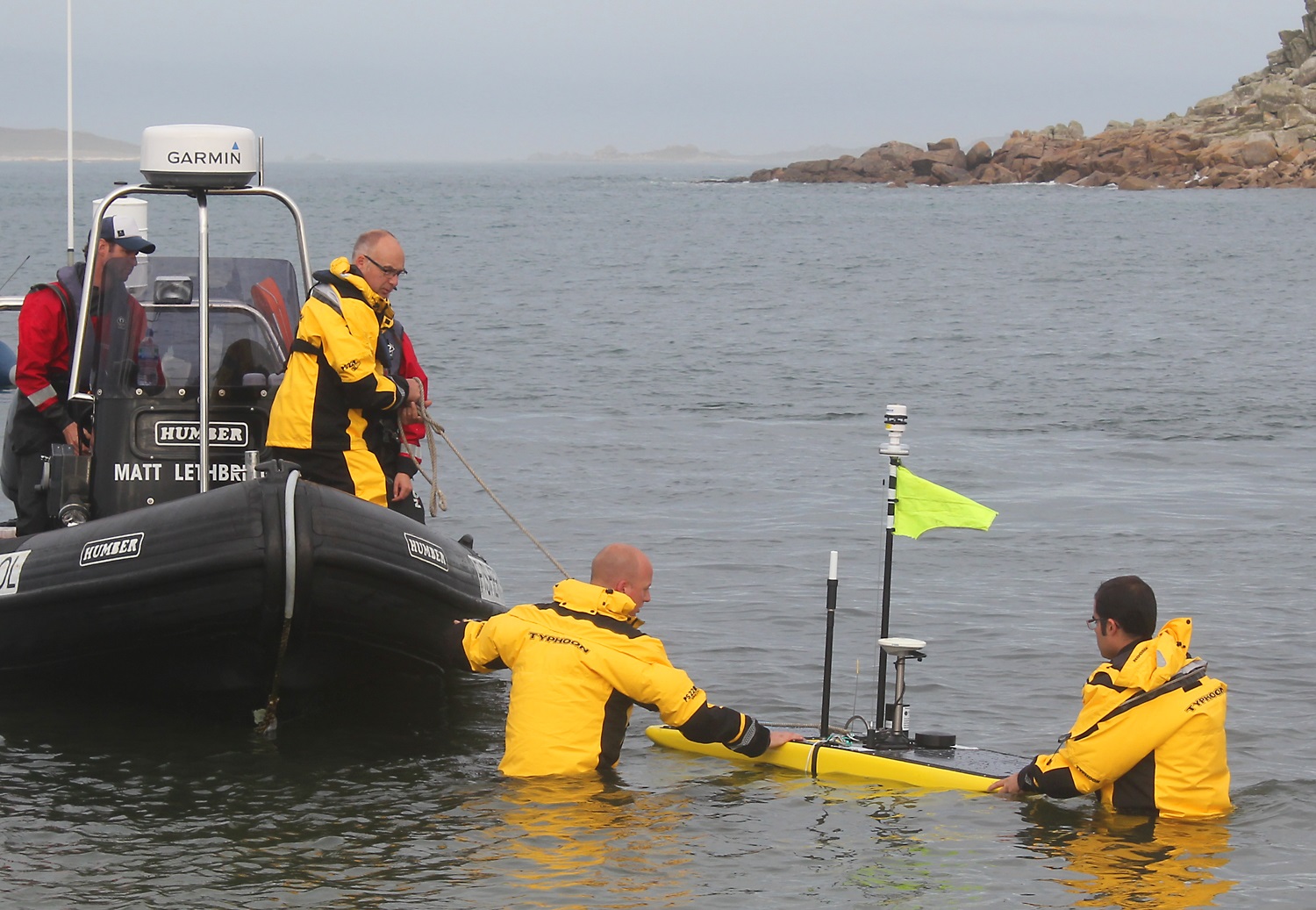 The Waveglider consists of two parts: a float or surface unit and a glider or submarine unit, connected on the NOC vehicle by a 7m umbilical. Developed in Hawaii, the float unit is based on a surfboard. The sub is fitted with pivoting wings and - as the float rises and falls with the waves on the surface - the sub unit is moved up and down at depth, where the pivoting wings provide drive and the vehicle moves forward. The float contains the control unit, battery and sensors and is covered with solar panels.

Deployment is straightforward - the float and sub are strapped to a floating frame, towed into position or lowered from the deck of a ship. The release line is pulled and the sub drops away, powering the vehicle instantly. The float has GPS and Iridium modules, and is steered by a rudder on the sub. There is also a thruster for limited manoeuvring when there is insufficient swell to power the vehicle. Recovery requires two lifts onto the deck of a ship or, more delicately, a harbour wall when the vehicle has been towed into port.

The Waveglider weighs approximately 250kg with the weight split fairly evenly between the surface and the sub-unit. The surface unit is 2.9m long with a beam of 0.66m. It has three main payload bays and several masts for instruments and communication. The sub-unit is 2.2m long with a wingspan of 1.4m for the fins. Sensors can also be fitted to the sub-unit, as can towed instruments. Currently one battery is fitted, with a second to be fitted in the future, charged by three photovoltaic arrays capable of up to 156W. As long as the consumption over 24 hours does not exceed the solar power supply, the sea endurance of the Waveglider is technically indefinite.

In its current configuration, the NOC Waveglider is fitted with a Seabird CTD on the sub, a Sonardyne acoustic modem, an RDI 300kHz workhorse ADCP and an Airmar WX150 weather station. Speed in a good swell can be 3-4 knots but 2kts is more usual. It has a SeaMe X-band radar transponder and an AIS receiver. Piloting and communication is via Iridium, mobile phone and WiFi. It also has a secondary independent GPS tracker. 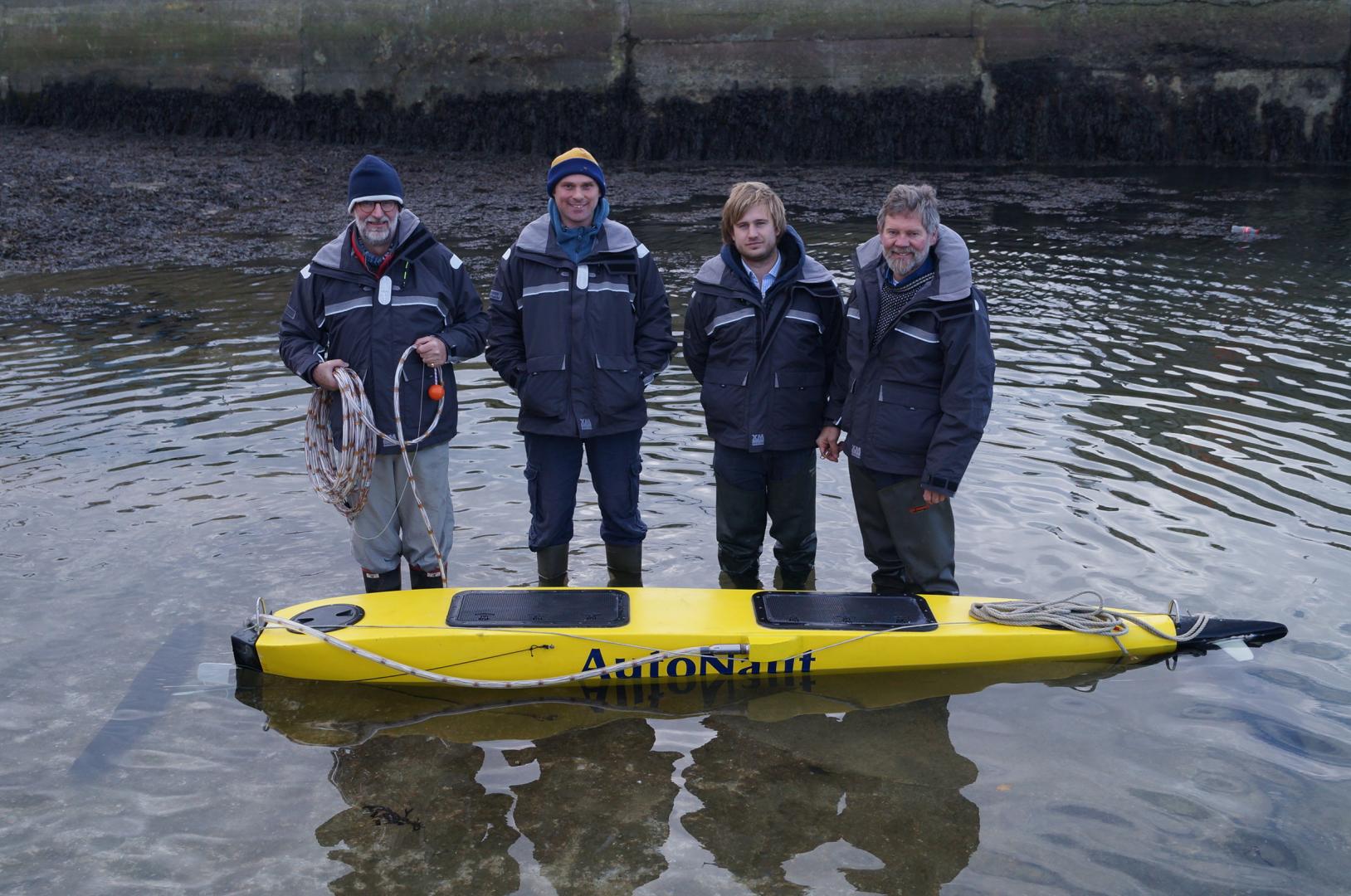 The AutoNaut, developed in the UK, is a wave-powered vehicle with two pairs of wings or foils set on struts at either end of the vehicle. The hull is narrower than the Waveglider with its shape resembling a canoe. It is also significantly smaller than the Waveglider, making deployment, recovery and towing a lot simpler. In order to recharge the battery while at sea, AutoNaut has solar panels fitted to the surface and can be fitted with a 25W methanol fuel cell for longer deployments where sunshine is at a premium.

The AutoNaut is 3.5m long with a beam of 0.43m and weighs around 100kg. The ASV is currently fitted with an Airmar WX150 weather station with a hull penetrator for a fluorescence puck and two towing points to which one RBR CTD can be fitted. AutoNaut also has an AIS transponder, SeaMe radar transponder and back-up GPS tracker. The two photovoltaic (PV) arrays in series provide 125W and a lithium ion sulphur battery provides the main power. Communication is via Iridium or short-range radio. Operating more like a glider than the other two ASVs, the AutoNaut has an operating speed of 1–2 knots, but can reach a maximum of 3 knots. AutoNaut also has a small thruster, which can be used to aid in propulsion. The small size and small battery mean that for most missions, consumption has to be kept within what the PV array can provide. This in turn gives it very long duration of up to six months. 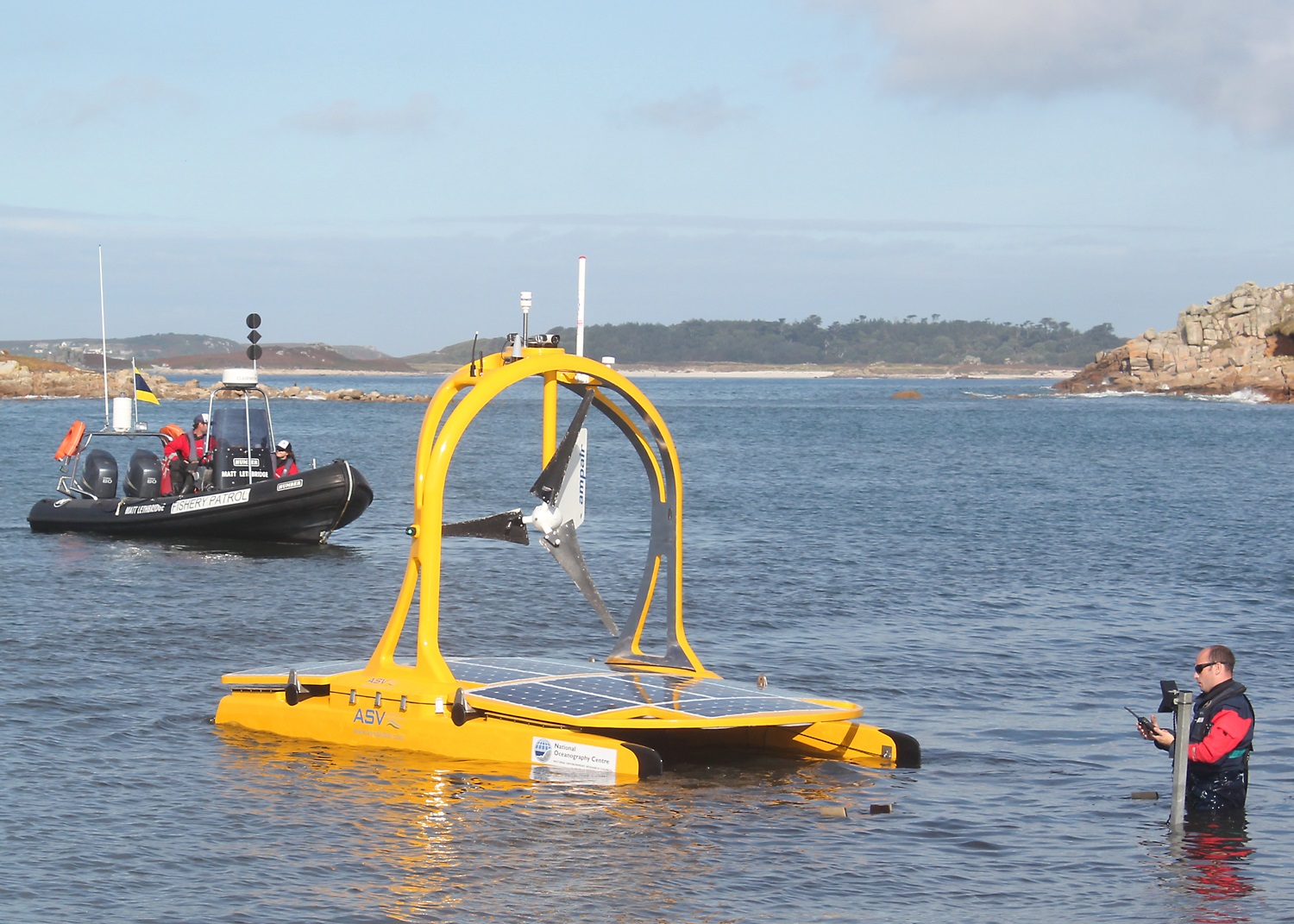 The C-Enduro is a catamaran driven by a pair of electric outboard legs and powered by a large array of solar panels, a wind turbine generator and a diesel generator in the starboard hull. Very much a power boat in design, it too was developed in the UK. It is launched and recovered from a road trailer and is towable. It has the largest payload capacity both physically and electrically, but probably the shortest sea endurance period of 60-90 days. Sensors can be mounted on the main vessel, on the drop keel or on a towed array. It also has a 100m electric winch.

The C-Enduro's dimensions are 4.2m by 2.4m with a large arch or mast giving an air draught of 2.8m. The total weight is around 500kg. Currently NOC’s C-Enduro it is fitted with an Airmar WX150 on the mast, an RBR CTD and a fluorescence puck on the drop keel and several ports for cameras. For navigation it has an AIS transponder and a SeaMe radar transponder. Communications are received and transmitted via WiFi or Iridium. For power, the 12 photovoltaic arrays provide up to 1.2kW, the Aerogen wind turbine up to 0.7kW, and the diesel generator provides 3.2kW when it is running. The propulsion system uses two 1.4kW motors, but is usually run at around 50 per cent to give a nominal speed through the water of 2.5–3.5 knots, with a top speed of 7 knots.

Of the three ASVs, C-Enduro will suffer from biofouling to a greater extent than even a 200m underwater glider and consequently, will lose speed over a three-month deployment even if antifouling paint or another similar coating is applied.

The instruments that can be carried by each of the ASVs in the NOC fleet are many and varied, and each design can carry a payload of several instruments. The biggest limitation with ASVs is the lack of depth profiling capability, although the C-Enduro can carry out some deployments to 100m using its winch and the Waveglider has a 7m deep profile. The biggest strength of an ASV is their persistent surface presence. This has advantages for activities such as like photographic monitoring and gathering weather information. They also have a future as data harvesters, where an underwater vehicle or moored device talks to the ASV acoustically, and the data is relayed over Iridium.

Examples of instruments that have been installed to ASVs for demonstration projects such as the MASSMO series are the Vemco fish tracker, Decimus passive acoustic monitor with a Seiche acoustic array, UK Met office self contained meteorological instrument suite, Kongsberg sidescan sonar, single beam echosounder, pyranometer, Chelonia PAM and SMRU SoundTrap (PAM). All of the vehicles have been installed with at least two GoPro cameras to record both still images and video from the vehicles. In the near future, it is planned to fit the SeaOWL oil and chlorophyll detector to the AutoNaut.