The NOC Surface Flux Dataset contains estimates of the following parameters (including uncertainty) on a 1° monthly mean grid for the global ice-free ocean:

This web page describes the need for these parameters, the way we have estimated, the observations used and how to access the data. 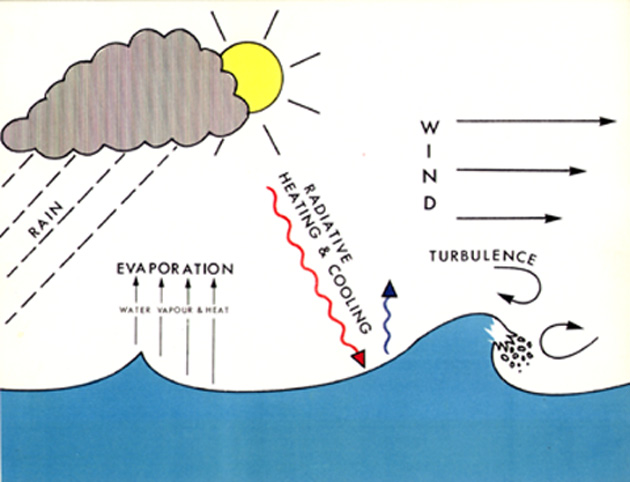 Schematic showing the different components of the ocean heat fluxes. 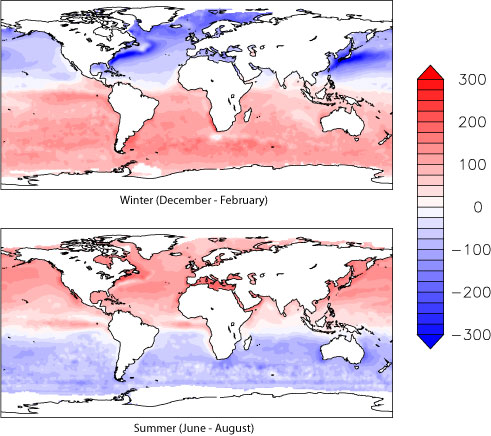 The oceans and atmosphere are strongly linked by the transfer of energy (momentum and heat), water, and gases (e.g. carbon dioxide) between them. For example, the wind blows over the ocean transferring energy to the surface. This is turn slows down the wind and creates waves.

Similarly, as the air blows over the oceans it is warmed or cooled by the underlying sea surface, with a transfer of energy between them. Similar processes drive the transfer of water and gases between the oceans and atmosphere.

Measuring and estimating the fluxes

The fluxes between the oceans and atmosphere can be measured directly. This requires the small-scale atmospheric motions to be measured at a high frequency. High frequency measurements of the temperature and humidity are also required. These measurements are costly. As a result they are only made on a few research vessels. This in turn limits the extent of the observations. In order to estimate the fluxes globally we need to turn to other sources.

Using the high-frequency measurements made on board research vessels the fluxes can be parameterised in terms of the bulk atmospheric properties. I.e. simple equations can be defined to estimate the fluxes in terms of a transfer coefficient and the mean temperature, humidity and wind speed at a two known levels. Over the oceans these are usually chosen to be the sea surface and at 10 m above the sea surface.

Estimates of the mean atmospheric parameters can come from a variety of sources including:

The majority of the observations collected as part of the VOS Programme include the parameters required to calculate the fluxes.

These measurements are normally made every 3 or 6 hours using basic equipment and methods. Examples include mercury or alcohol thermometers in meteorological screens. Other examples include visual observations of the wind, waves and present weather. Increasingly, automatic weather systems are used to make the observations. 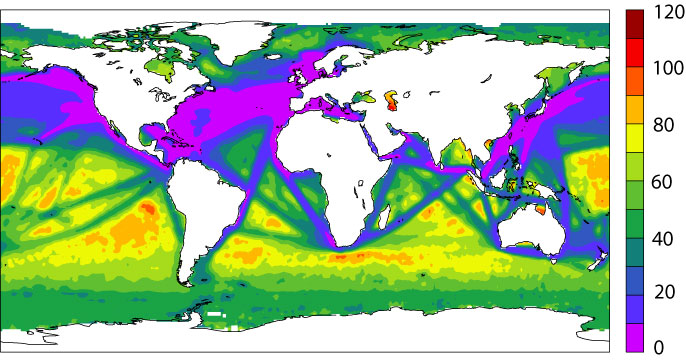 The equations used to calculate the fluxes are non-linear. As a result, random errors in the input data may combine to give biased estimates of the fluxes when averaged over a large number of points. To minimise these biases we therefore need to minimise the errors in the input data. This can be achieved by averaging prior to calculating the fluxes. However, the atmospheric parameters can be correlated. For example, the air – sea temperature difference and wind speed is often correlated and this link may be lost on averaging. This will introduce other errors.

The data used to create the daily average fields are sparse and unevenly distributed. To take this uneven sampling into account an optimal interpolation (OI, or simple kriging) scheme has been used to grid and average the data. In this scheme, the data are weighted according to their clustering and how confident we are in them. This scheme also has the advantage of filling gaps and providing uncertainty estimates for the gridded fields. Where gaps have been filled or we have limited data the uncertainty is high.

The monthly mean fields forming the NOC dataset can be downloaded from the US National Center for Atmospheric Research (NCAR) and the British Atmospheric Data Centre (BADC). The daily fields are available on request.

The observations used to construct the NOC Surface Flux Dataset come from the International Comprehensive Ocean – Atmosphere Data Set (ICOADS). Further details and be found on the ICOADS webpage.