The Discovery Collections comprise benthic and pelagic samples from many areas of the world’s oceans. It is the only collection consisting solely of deep-sea and open-ocean invertebrates in the UK and provides vital insight into the species that live at extreme ocean depths. 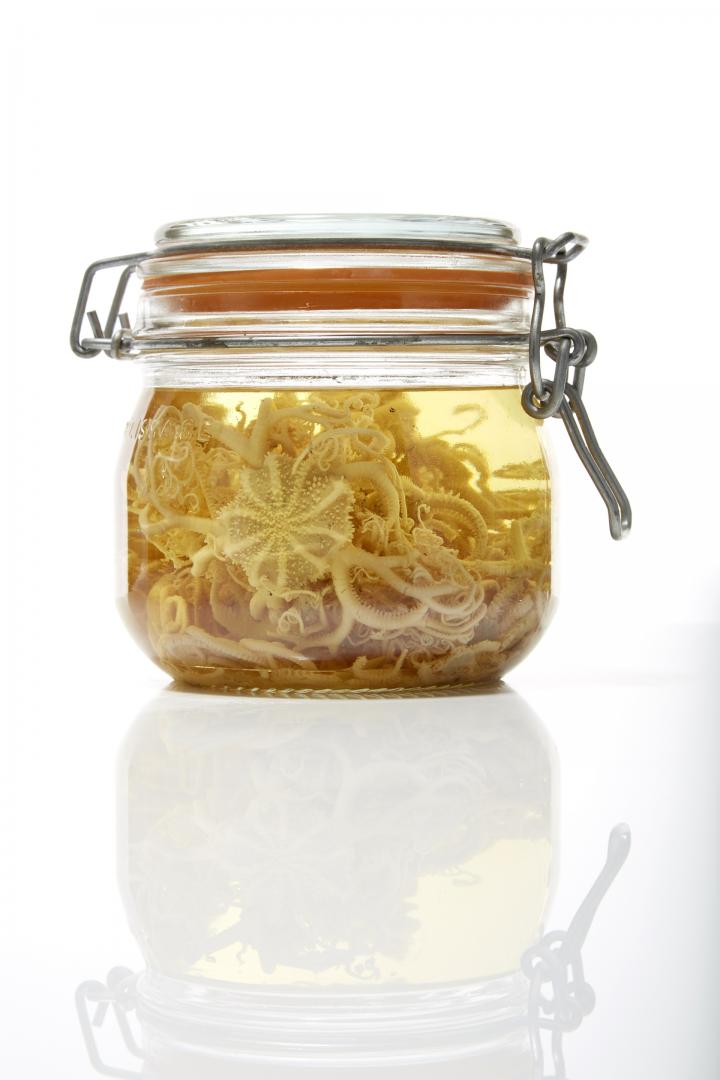 The Discovery Collections facility maintains a key time-series of deep-sea organisms dating back to 1925 when the RRS Discovery collected the first samples in the Southern Ocean. The collection provides great insight and understanding of deep-sea and open ocean fauna and is continually expanding as research cruises explore more of the deep oceans, gathering new data and samples.

Research on specimens within the Discovery Collections is undertaken to determine whether organisms found are new to science. Scientists can visit the NOC to carry out research on the collections and help to catalogue the species that have been found. 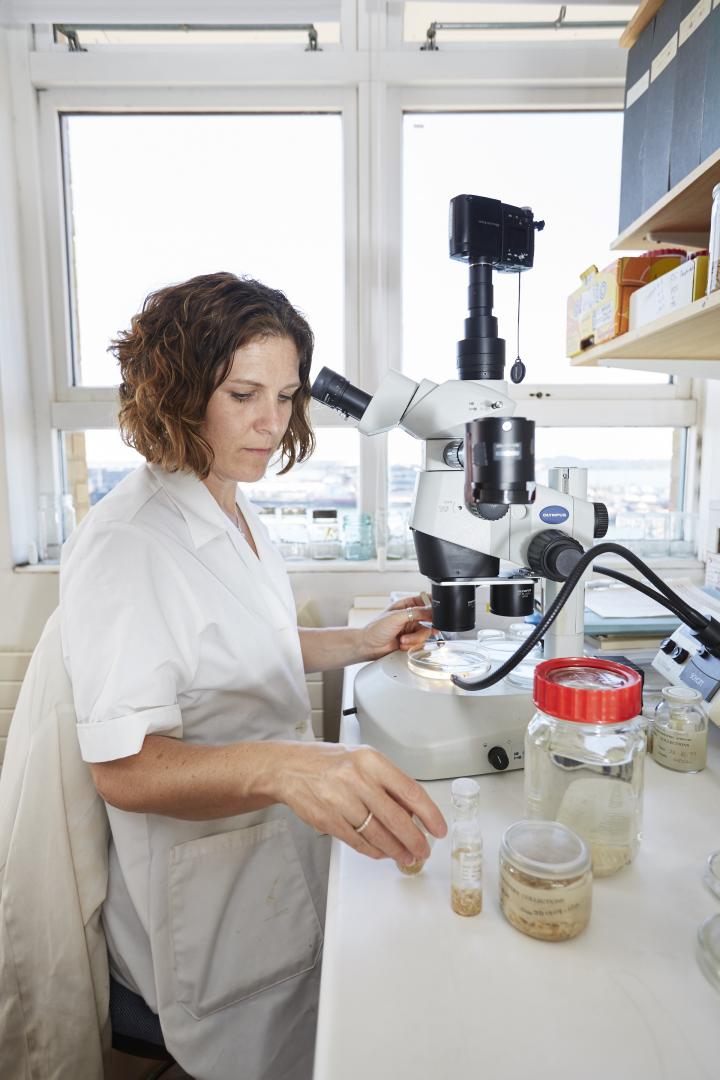 The oldest samples in the collection date back to 1925, when the first samples were collected in the Southern Ocean by Scott’s ship Discovery. The collection of these samples was funded by a levy on whale oil processing in the Falkland Islands and was aimed at understanding more about whale biology and their environment. As a result, many of these early samples were pelagic, focusing on krill, which is an important food source for whales.

Even from the beginning, many benthic samples were also obtained. During these early years the Discovery Collections consisted entirely of Southern Ocean samples. After 1951 sample collection shifted from the Southern Ocean to the eastern North Atlantic. Initially research was conducted in the pelagic realm and much of the material in the collection from 1952 to the early 1970s is from within the water column with some benthic material collected from the West African Margin. After 1972, benthic research became of greater importance and major benthic surveys were made off the continental shelf of the UK.

The four research ships named RRS Discovery have each contributed to the samples within the collection. Samples have been collected using a variety of methods including trawls, corers, sledges, grabs, baited and sediment traps and remotely operated vehicles before being transported to the NOC for preservation and classification.

The Discovery Collections are now divided into two parts. The first, consisting of the early Southern Ocean material and much of the early North Atlantic material, largely up to 1975, is housed at the Natural History Museum in London. This material has played an important role in advancing our understanding of the biology of the oceans. In addition, it provides a picture of the Southern Ocean prior to the catastrophic decline of whale populations, and a major documentation of mid-water and benthic environments in the North East Atlantic. The second part of the collection, consisting of both benthic and pelagic samples taken off the European continental shelf since 1975, is housed at the NOC in a temperature-controlled warehouse. 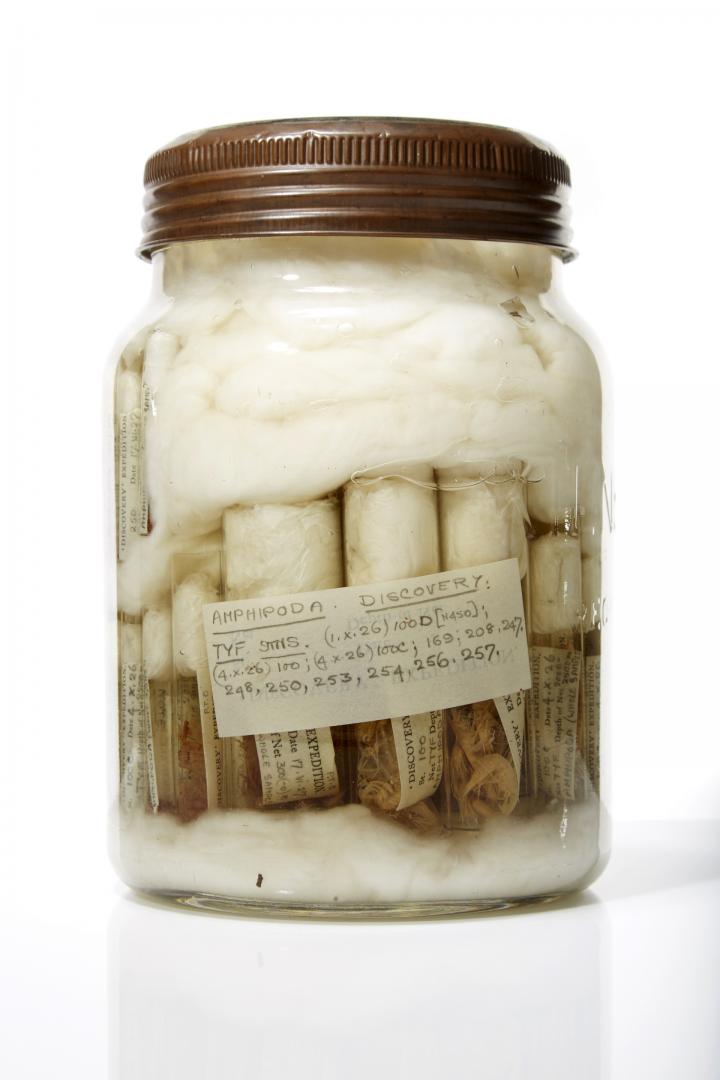 The collections continue to provide important base-line data on the deep-sea environment and showcase an extensive number of newly discovered deep-sea species. The material is used in house by NOC scientists, by other UK institutes and also internationally. International users of the Discovery Collections include institutes in Germany, France and Denmark, the USA and China.

The Discovery Collections are still expanding, with sampling programs in the North East Atlantic adding to the collection every year. The majority of recent samples have come from the Porcupine Abyssal Plain in the eastern North Atlantic (a marine geological feature named after the ship, HMS Porcupine, that took the first researchers to the area) where a great deal of research is still carried out. Other recent major collections have come from the Arabian Sea and around the Crozet Iles.

Continued exploration of new oceanic areas will ensure that this historic and internationally important collection continues to provide an invaluable resource to marine biology.

The Discovery Collections at the NOC Southampton contain both specimen material and bulk ecological samples and consequently have continuing value for further taxonomic, biological and ecological research. In the collections there are now over 68,000 lots ranging from single glass vials containing a single specimen to 25-litre tubs full of specimens.

Dr Tammy Horton manages the Collection at the NOC. “We actively use the specimens in our teaching at undergraduate level and our masters and PhD students also use them in their research,” she explains. “Our Ocean and Earth Science (OES) students are very lucky because very few universities around the world have such a resource on hand.”

There are numerous ways you can get involved with contributing to the work of The Discovery Collections held at the NOC.