A diverse range of methods and equipment are used for obtaining samples from the sea and seabed, depending on the material or measurement required.

Use the tabs below for descriptions of different types of sampling.

Corers are used for collecting sediment from the ocean floor; they work by pushing or grabbing sediment into containers. The National Marine Equipment Pool has eight different types of corer with both tubular and box varieties available.

Gravity coring is the simplest method of obtaining a sediment sample from the seabed. This corer consists of a weight with steel tube sections attached to it. The weight can vary between 100kg to 1000kg. Selection of the length of sample tube is determined according to the type of sediment being sampled and is generally between one and four metres. The end of the corer is fitted with a tapered cutter section and a catcher to retain the sample. Sample tubes are fitted with a clear polycarbonate liner with diameter of 63.5mm. To collect a core sample, the corer is lowered down to the seabed on the end of a wire, stopping a set distance above. It is then lowered at a set speed into the sediment to obtain the sample, before being raised to the surface; it is dismantled and the polycarbonate core liner encasing the sample is removed.

A slight variation on the gravity corer is the Kasten corer. This uses a similar set up, but uses a sample tube manufactured from sheet metal of square cross section with sides approximately 150mm. No liner is used. A cutter section fitted to the end of the sample tube has two spring-loaded flaps that close when the corer is withdrawn from the sediment. The sample tube is designed to be split to gain access to the sample.

The piston corer is able to take longer samples than the gravity corer. Core samples of 90mm and 110mm diameter can be taken. The corer consists of a weight fitted with steel sample tubes. A PVC liner tube is fitted the full-length core barrel. A piston is fitted inside the PVC liner and is attached to a wire, which runs inside the corer barrel, through a hole in the centre of the weight and is attached to the main deployment wire. Up to five sections of 5.4 metre-long barrels can be fitted depending on the type of sediment being sampled. The corer is lowered on a wire to the seabed until a trigger weight, suspended from the corer weight via an arm, contacts the seabed. This operates a mechanism, which allows the corer to free-fall a distance pre-set by the length of trigger wire and sink into the sediment.

As the corer descends to the seabed, the main deployment wire becomes taught at the point the piston inside the barrel is level with the surface of the sediment. As the corer sinks further into the sediment, the piston should remain static at its optimum point at the sediment surface. The core tube then moves past the piston into the sediment creating a vacuum at the top of the tube which helps to overcome the friction generated between the sediment and the inside of the core liner. On recovery, the corer barrels are removed one at a time and the PVC liner containing the sample is cut into manageable lengths. Sample lengths up to 25 metres long are possible in theory, but in practice this is dependent on the sediment type and is very difficult to achieve. 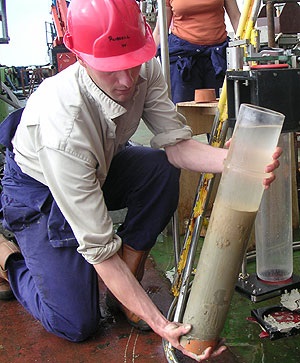 The multi-corer has been developed to take up to twelve undisturbed cores in clear plastic tubes 56mm diameter × 600mm long. The corer consists of a tubular frame with a sampling head attached to it by a hydraulic damper. The core tubes are attached to the head, which has a series of spring-loaded arms to swing under the tubes, sealing the bottom and also plugging the top to prevent the sample being disturbed during recovery.

A series of lead weights are attached to the head, which can be selected to regulate the depth of sample taken. The corer is lowered on a wire to the seabed until the frame makes contact and the deployment wire becomes slack. At this point the core tubes are driven into the sediment by gravity, at a controlled rate of descent governed by the hydraulic damper and weight of lead on the head.

The mega-corer works on a similar principal to the multi-corer but is able to take sample cores of a wider diameter. It is able to take up to 12 undisturbed samples in clear plastic tubes 100mm diameter × 600mm long.

The SMBA (Scottish Marine Biological Association) box corer is designed to take an undisturbed sediment sample of 600mm square, up to a maximum depth of around 450mm. The corer consists of a sample box mounted on gimbals, and a spade assembly. The box corer is lowered onto the seabed on a wire at a controlled rate until its frame rests on the bottom. The sample bucket is forced into the sediment by the weight of the corer. As the corer is slowly pulled out of the sediment, a mechanism allows the spade to swing below the sample box sealing in the sediment. Simultaneously, spring loaded flaps above the sample box are closed to prevent the sample being disturbed during recovery. The use of this equipment is very dependent on the type of sediment to be sampled and the current sea state.

The NIOZ (Koninklijk Nederlands Instituut voor Onderzoek der Zee, the Royal Netherlands Institute for Sea Research) box corer works on a similar principle to the SMBA Box Corer. It is able to take undisturbed samples of 500mm diameter or 500mm square, up to 500mm depth. It differs in design to the SMBA corer in that it has two spades, which operate from either side of the sample box. This design results in a more balanced ‘pull-out’ of the corer, reducing the risk of disturbing the sediment during sampling.

The Day Grab is a small corer consisting of two quadrant-shaped jaws mounted on a frame. Removable lead weights are bolted to the frame to allow the weight of the corer to be adjusted to suit the sediment type. The Day Grab is lowered to the sea floor on a wire with its two jaws locked open. When the grab contacts the sea floor, a trigger mechanism unlocks the jaws. The action of pulling the wire to recover the grab causes the jaws to rotate towards each other and close to grab a sample of sediment.

Dredging gathers loose rocks sitting on the ocean floor using a technique that has changed little in hundreds of years. It is still a useful way of mapping the broad-scale distribution of rock types on the sea floor.

Dredgers have a chain-link bag with large metal-jawed opening that scoops the contents into the bag. The dredging equipment is lowered to the seabed on a cable and dragged along the bottom for some distance before being brought to the surface.

The rock dredge package is lowered to the sea floor using a steel wire cable. This means that there is no data transmission, such as video, to show what is happening below. Depending on the ocean depth, the amount of cable deployed to undertake the transit can be up to two and a half times the water depth.

During the dredging transit line, the speed of the research vessel controlling the dredge is kept between 0.5 to 1.5 knots. The speed of the vessel is adjusted as necessary depending on the loadings experienced on the winch monitoring system of the vessel. This means it takes many hours to perform a dredge and many more before the crew and scientists find out if it has been successful.

How the dredge works

The rock dredging equipment comprises of a mild steel frame with an opening approximately 1m wide by 0.5m high, and 0.25m breadth. Attached to the back of the frame, and secured by wire and shackles, is a steel net approximately 1.5m long. Secured to the net, by chain and shackles, is a 0.3m diameter by 0.8m long pipe ‘bucket’ used as a weight. The Dredge is deployed connected to the vessel’s main trawl warp (steel cable), nominally 14,700 metres in length, by an anchor chain and weak link.

The anchor chain acts as weight to keep the rock dredge on the sea floor during the dredge line transit. The rough terrain causes the frame to bounce around, so the anchor at the front and ‘bucket’ weight at the back keep it grounded. The weak links are a system safety device used to separate the main warp from a trapped rock dredge package.

A strangle wire, wrapped through the chain mail and also connected via a weak link to the main warp enables the dredge to be recovered in the event of snagging. The strangle wire works by closing the ‘neck’ of the rock dredge net and pulling the dredge net over the steel frame. This tumbling action hopefully frees the rock dredge from its trapped position without spilling the contents.

Dredges have been carried out on a number of research expeditions undertaken by the NOC, enabling us to discover more about the sea floor in a range of oceanic locations. Our dredging equipment is available for use via the National Marine Equipment Pool.

Trawling usually happens in mid-water or at the bottom of the sea, and is used for sampling mega-fauna including fish, sea urchins and sea cucumbers. Trawls have a cone shaped net attached to a metal frame, and are towed on a wire behind a ship. Once a trawl has reached the correct depth its net is opened and samples are taken.

Before trawling begins it important to know if the terrain is suitable as extruding topographic features such as underwater mountains, cables and other obstacles need to be avoided. If the area is not well mapped a survey of the area will be performed first using echo sounders on board the ship or by deploying a Towed Ocean Bottom Instrument (TOBI). Once the trawl is in progress, the crew cannot visually see what is happening, as there are no cameras; instead they will use acoustic transmissions to give depth and angle information.

Trawling is a slow process. As the wire is let out it billows, so many extra metres of wire is needed to get to the right depth. For example, in 5,000m of water depth around 13,000m of wire will be required. Consequently, the trawl will be many kilometres behind the ship and many kilometres down, making both guiding and steering difficult.

The NOC mainly use two different kinds of trawl for scientific research, which are detailed below.