So far we have mostly been in "Irish Sea", which despite a fresh breeze, has been calm with excellent visibility - but rather turbid green waters with too many diatoms and not enough coccolithophores for my liking.

We are almost getting into a routine now as we get through the second cruise day, settle into our scientific nests, complete our fourth CTD station, start preparations for the first deck incubation experiment, and converge on Mingulay for the deep-sea coral reef collection.

The scenery is changing nicely – we went to bed with the sun setting behind the Lake District (shame it was a bit cloudy) and the Isle of Man to port, woke up with Northern Ireland to starboard and are now passing Islay. So we are seeing quite a bit of the British Isles which gives me an excuse to point out another aspect of the cruise track.

As we sail round the UK we will be progressing though the sea areas of the BBC shipping forecast. With the aid of Google Maps, a bit of internet research, and a file from Toby, I have now managed to superimpose our planned cruise track on a map of the sea areas. As you can see the result is quite impressive - it looks like we should visit, or at least clip the edge of, just about every one of them except for SE Iceland and Faroes in the far north and Trafalgar which is off the map to the south – and is only mentioned in the 00.48 bulletin. When my brother Roland heard about this cruise he loaned me his copy of an excellent book ‘Attention all Shipping’. The author, Charlie Connelly, celebrated the BBC Shipping Forecast by travelling round NW Europe, over several months and with considerable difficulty, trying to visit as many of the weather forecast areas as possible.

So, we could rename this the shipping forecast cruise, and obviously we should at least try and update you as we progress through the different sea areas. So far we have mostly been in ‘Irish Sea’, which despite a fresh breeze, has been calm with excellent visibility - but rather turbid green waters with too many diatoms and not enough coccolithophores for my liking. We are now edging into Malin, and noticing the difference in conditions as we get exposed to an Atlantic swell - although if it is not as bad as the weather forecast synopsis: 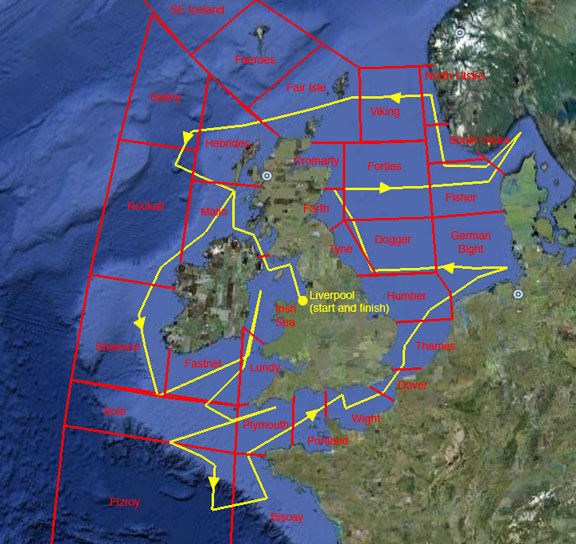 From a scientific perspective the reason we are going through so many weather areas is that we are trying to explore the range of conditions around the British Isles. Indeed, the very varied seas with their different Atlantic exposure, tidal systems, weather systems and river inputs, create a remarkably complex mosaic of different marine chemical environments, and for the purpose of our research this acts as a very useful experimental system.

Personally I am looking onward to getting out to Rockall, Shannon and Fitzroy where we are hoping for a coccolithophore bloom. However, there is a distinct possibility of gales in Malin before then.