On the cruise, we will study the impact of the changing chemistry on marine organisms and ecosystems, on the cycling of carbon and nutrients in the sea, and on how the sea interacts with the atmosphere to influence climate.

On the 6 June 2011, the UK research vessel the RRS Discovery left Liverpool docks to embark on the first research cruise in a large UK programme studying the impacts of ocean acidification.

On the cruise, researchers are investigating the impacts of changing seawater chemistry on:

A consortium of 23 scientists from eight different UK institutes are carrying out the science on the cruise, which will end on 11 July 2011.

The cruise will take place in NW European seas, and will circumnavigate the British Isles.

See the cruise map, below: pale-coloured areas are where coccolithophore blooms frequently occur, the stars denote places where we plan to take on board seawater for the bioassay (CO2 manipulation) experiments, circles denote existing time-series sites (places where measurements are made on a regular basis) and dotted lines indicate routes along which measurements are regularly made.

(See below for a list of cruise participants and the first blog.) 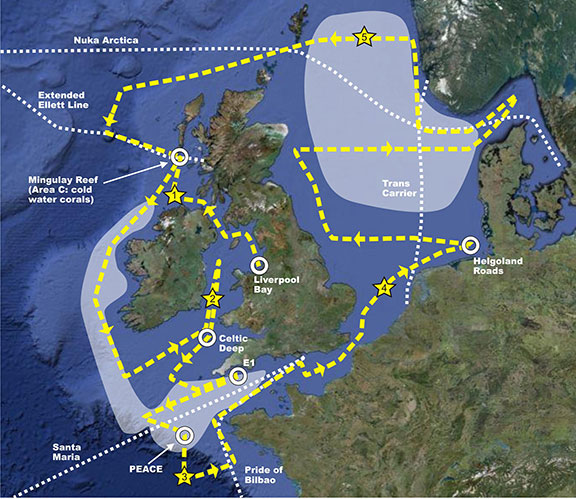 Cruise to investigate impacts of ocean acidification on the surface ocean and the life within it.

Through land use changes and the burning of fossil fuels (oil, gas and oil) for energy, humans are releasing vast amounts of carbon dioxide (CO2) into the atmosphere. This anthropogenic CO2 release is notorious as the likely cause of global warming. However, it is also responsible for another potentially major environmental problem – ocean acidification.

More than two billion tonnes of human-produced carbon are entering the ocean as CO2 every year, over and above the natural amount. This extra CO2 is making seawater more acidic, with consequences for marine life that remain poorly understood.

On the cruise, we will study the impact of the changing chemistry on marine organisms and ecosystems, on the cycling of carbon and nutrients in the sea, and on how the sea interacts with the atmosphere to influence climate.

We will do this in two main ways. Our first approach will be to look at how ecosystems vary between places where the chemistry of seawater is naturally more acidic or alkaline. By contrasting the observations over a range of different conditions, we hope to improve understanding of how acidification affects organisms living in their natural environment, where natural selection and adaptation have had time to play out.

Our second approach will be to conduct experiments using tanks of natural seawater collected from the surface of the sea and brought into a controlled laboratory on deck. The natural seawater will then be subjected to various levels of carbon dioxide that may occur in the future. This cruise will be the largest ever experiment to examine the effects of changing CO2 levels on real world samples out at sea as opposed to in the laboratory. These ship-board studies will give a glimpse into what may happen to the sea as a whole as atmospheric CO2continues to rise. 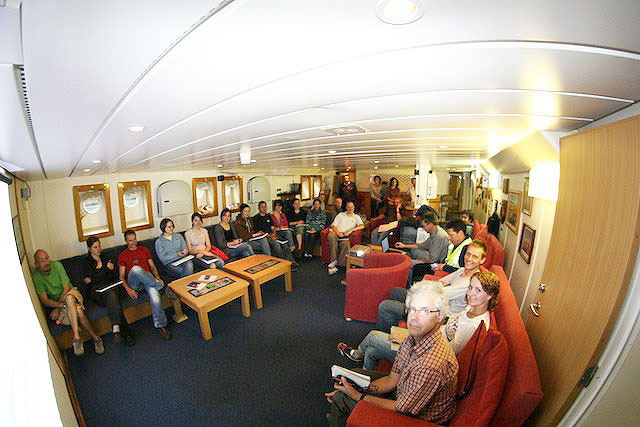 Yesterday and today have mostly been taken up with preparing for the cruise. Most of us arrived for the first time yesterday morning, to find the ship waiting for us at Liverpool dock. It was pleasing to see it there, a large research vessel but dwarfed both by a large bulk carrier alongside and also by a number of enormous wind turbines positioned at various places around the dock. It was rather atmospheric as we drove along the long bare roads through the industrial port, in blazing sunshine, underneath the whirring turbine blades, to our first view of the ship.

Groups from Southampton, Plymouth, Norwich, Edinburgh, and Essex have arrived and unloaded their vans and cars. Lorries with equipment had already arrived and been unloaded. 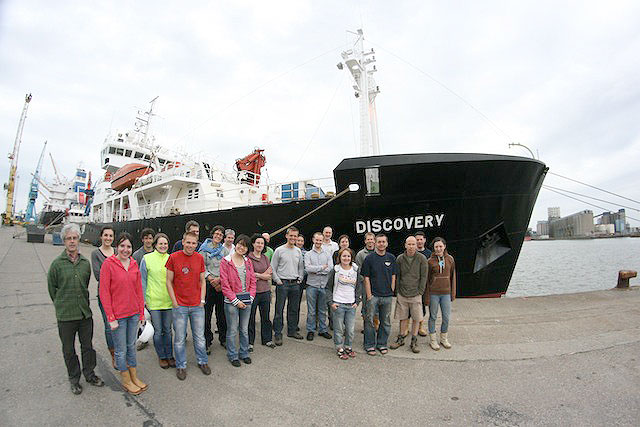 Upon first entry into the ship, it looked rather like the inside of a warehouse, with cardboard boxes and plastic crates piled high everywhere inside the various laboratory spaces. Gradually the clutter and congestion has diminished as instruments have been taken out of their containers and set up on benches, some boxes and crates have been stowed away, and various pieces of equipment have been unpacked. From looking like a warehouse, frenetic activity has transformed the laboratories into something actually resembling laboratories. Those scientists responsible for setting up the purpose-built laboratory containers for the bioassay experiments (of which more in future blog entries) have been especially busy, putting up racks, light panels and electrical wiring. A vast number of screws, ties, strap, bungee cords and ropes have been used to tie down each and every item of equipment, to prevent it being able to fall over or crash around in the event of rough seas.