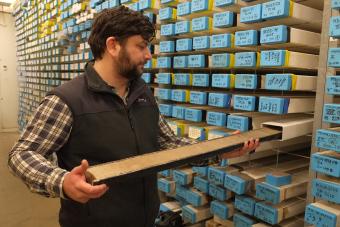 Large volume submarine landslides, triggered by the inception and growth of submarine volcanoes, represent among the largest mass movements of sediment on Earth’s surface.

This is according to research published today in Nature Communications by scientists at the National Oceanography Centre. These landslides could potentially cause tsunamis, and represent a significant, and as yet unaccounted for marine hazard.

Landslides on volcanic islands above the sea have been studied for decades. Yet, by studying a 43 million-year record of submarine landslide deposits from sediment cores, this research reveals that submarine volcanism can generate landslides many times larger than those recorded above the sea. In the Canary Islands these landslides were commonly 100-150 km3, but could be up to 900 km3. A landslide that size would contain enough sediment to bury the Greater London area to a depth far greater than the height of the Shard.

Lead author, Dr James Hunt from the National Oceanography Centre, said “What is really key here is that submarine volcanic landslides can be so much larger than their better studied counterparts above the sea. However, the depth these landslides happen at reduces their potential to generate a tsunami. The evidence also suggests they generally occur in many stages, which reduces this potential further. Still, this research is an important part of helping to better understand a phenomena that could potentially affect countless island archipelagos and seamount chains.”

Deposits from past submarine slides also reveal new insights into the development of volcanic islands as they grow under the sea. Magma rising under submarine volcanoes as the grow causes the seafloor and ocean crust to dome, triggering landslides. This study suggests that the slides happen at every stage of a volcanoes growth. Therefore they provide important information about the evolutionary timing of submarine volcanoes, from inception through to emergence above the sea as they become volcanic islands.

This research is based on cores taken by the Ocean Drilling Programme (ODP). The cores provided evidence for 43 million-years of past submarine landslides in the Canary Islands, making it the longest unbroken landslide record to date. The drill cores not only contain landslide deposits, known as turbidites, but also a continuous record of the background sediment that can be used to accurately date the turbidites. Additionally, geochemical tests enabled scientists to trace which Canary island the landslide came from, and so when each islands began to grow and eventually emerge above sea-level.

This research was funded by NERC in collaboration with Kingston University, and forms part of the NOC’s on-going research into hazards on the seafloor.