A Year of Discovery – unlocking the secrets of the shelf seas 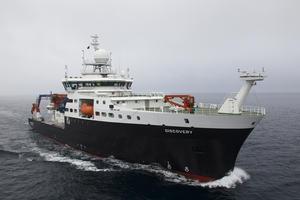 The Royal Research Ship Discovery has completed her first year of research. Over a series of nine research expeditions, scientists studied the seasonal events taking place in UK shelf waters throughout the year. The vessel, procured by the Natural Environment Research Council for UK science is the latest in marine technology.

Starting in the spring of 2014 just as the plankton blooms got underway, more than 100 researchers have tracked the take-up of carbon and nutrients by plankton and food webs. Through the year, later expeditions would follow the subsequent recycling of dead plankton material into detritus and gases – for some material – a journey to the deep ocean where it can remain for eons.

Dr Phil Williamson, the programme’s science coordinator said “The Shelf Seas Biogeochemistry programme has been the most comprehensive study ever of the physical, chemical and biological processes in UK waters from the sea surface to the sea floor. This research will improve understanding of the key processes affecting marine ecosystems, how they may be affected by climate change and more direct human activities such as seafloor disturbance or overfishing.”

Photosynthetic life in the oceans provides around half of the world’s oxygen and also removes carbon dioxide from the atmosphere. Oxygen is released as the carbon goes into making plants - phytoplankton, which is eaten by zooplankton. These two types of plankton are the building blocks of the marine food web. A proportion of dead material even makes its way to the ocean floor fuelling life there.

Dr Henry Ruhl of the National Oceanography Centre said “A key question for the final leg of the journey in the plankton life cycle is: how much of it makes its way to the seafloor and how is it processed?

“Marine snow is a carbon-rich mix of decaying phytoplankton matter, dead microscopic animals and their poo. We are keen to know how – and how much of that material gets from the shelf seas into the deep ocean. This is where the carbon can be locked up for decades or thousands of years.”

The field phase of the research ended this summer with an expedition by RRS Discovery over the Continental Slope between Cornwall and southern Ireland led by Dr Ruhl’s team used robot subs, landers and underwater gliders and other tools to measure the processing and transport of material between relatively shallow shelf seas, which are less than 200 metres deep, and the Atlantic, which in this part of the ocean reaches depths of 4000 metres.

The National Oceanography Centre’s deep diving robot sub, Autosub6000 carried out photographic surveys of the seafloor to determine the abundance of different marine species and their role in food webs and natural recycling processes.

The Shelf Seas Biogeochemistry programme is jointly funded by the Natural Environment Research Council (NERC) and the Department for Environment, Food and Rural Affairs (Defra). Other researchers in the UK and Europe have also been involved in providing complementary data through the year, widening the scope of the study.

The programme is divided into five work packages led by oceanographers around the UK. Each package involves a multidisciplinary, multi-institute team and the overall programmatic framework maximizes scientific linkages and interactions between more than a dozen research institutes

This has been the fieldwork phase of the programme; over the coming months the researchers will analyse the data and samples collected from the expeditions.

Most of the work was conducted in the Celtic Sea collecting data and samples that will be analysed over the coming months.

The Autosub will be on RRS Discovery when she arrives in London on 7 October as part of an event to mark the anniversary of NERC’s 50 Years of Science. Discovery will be moored alongside HMS Belfast in the Thames until 11 October.