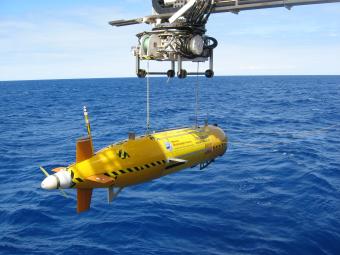 This month, scientists from the UK’s National Oceanography Centre (NOC) will join a team of marine scientists from the iAtlantic project on a month-long collaborative expedition to investigate the ecosystems and natural processes in the deep sea around the Cabo Verde islands in the central Atlantic Ocean.

The expedition – known as iMirabilis2 and led by the Spanish Institute of Oceanography (IEO, CSIC) aboard the research vessel Sarmiento de Gamboa (UTM, CSIC) – is much more than a scientific mission: on board will be a cohort of early career scientists who will undergo hands-on, at-sea training in a range of cutting-edge techniques and skills that will equip them to be the expedition leaders of the future. Partnering with them back on shore around the Atlantic are other researchers and students who are not able to join the ship but will be supporting the mission and participating in training activities through virtual means. Departing from Vigo in Galicia, northern Spain on 23 July, the expedition will spend a total 6 weeks at sea, sailing south to the Cabo Verde region and returning to Las Palmas in the Canary Islands at the end of August.

The NOC will play a vital role in the expedition, providing and operating the autonomous underwater vehicle (AUV) Autosub6000, which will be used to map areas of the seafloor using sonar and photography. The autonomous submarine will also be equipped with a new instrument to sample environmental DNA, specifically developed for this project. The NOC’s Dr Veerle Huvenne, co-chief scientist on the expedition, will work alongside the NOC’s Dr Erik Simon-Lledó and Dr Susan Evans to bring expertise in deep-sea habitat mapping, benthic ecology and eDNA analysis, both in abyssal, sedimentary settings and in more complex, rocky terrains.

The first leg of the expedition involves a week-long investigation of the seafloor geology along the Azores-Biscay Rise, a 3000m-high linear ridge lying approximately 700km west of the Iberian coastline. Led by colleagues from EMEPC, the Portuguese Task Group for the Extension of the Continental Shelf, this work will use the remotely operated vehicle (ROV) Luso, a deep-sea robot, to collect data that will contribute to our understanding of how the Atlantic Ocean opened up over the past 75 million years, as well as discovering more about the ecosystems that inhabit this part of the ocean. A key element of this leg is training in the use of the ROV for geological and biological investigations. In parallel, a small team of Cabo Verde scientists from the NGO Projecto Vito will collect important observational data on seabird ecology.

After a short stop in Las Palmas de Gran Canaria, the expedition’s second leg focuses on the ecosystems and habitats in the deep-water area around the Cabo Verde islands. Using state-of-the-art instruments and equipment, the team on board will collect an array of data that will help scientists better understand the distribution of seafloor habitats and marine life around Cabo Verde. The autonomous underwater vehicle (AUV) Autosub6000 – the UK National Oceanography Centre’s robotic submarine that carries out pre-programmed survey missions independently of the ship – will be used to map areas of the seafloor using sonar and photography. Autosub6000 will also be equipped with NOC’s brand new instrument to sample environmental DNA from seawater, which will give us an unprecedented forensic view of the diversity of life in the ocean. The ROV Luso will be used to carry out more detailed investigations of particular ecosystems, and seafloor landers from Heriot-Watt University will be deployed to investigate how these ecosystems function – for example, looking at food chains and respiration rates. In addition, some scientific detective work using seafloor sediment samples will help reveal past environmental conditions in the deep ocean. This is necessary so we can identify environmental changes in the past, understand the drivers behind them, assess how those changes affected marine biodiversity and ecosystems, and determine what that means for Atlantic marine life in the future – all objectives of the iAtlantic research programme. The expedition will also contribute important new data to support the sustainable management of the seas around Cabo Verde, as marine biologist Rui Freitas (Atlantic Technical University, Cabo Verde) explains: “The Cabo Verde archipelago is considered a world marine biodiversity hotspot, but is facing threats such as pollution and the effects of climate change. iMirabilis2 is a very ambitious programme that will use advanced technologies to produce important new, detailed data from the Cabo Verde deep-sea area, which we currently know very little about.”

Thanks to our dedicated and enthusiastic outreach team on board, the world of seagoing science will be opened up to those who have never been on a ship. Audiences worldwide can share the adventures of the scientists as they prepare for and undertake a range of experiments and investigations. Those joining the journey will learn about the equipment we use to sample the deep ocean, why we do it, what the data are used for, and how new discoveries and improved understanding can shape our approach to better managing human activities in the ocean.

The ongoing COVID-19 pandemic has made organising this expedition exceptionally challenging and plans have had to be significantly adjusted a number of times since the postponement of the original mission in 2020. Despite these challenges, the expedition team, including those from the NOC, feel positive about the upcoming expedition. Dr. Veerle Huvenne, co-chief scientist on iMirabilis2 said: "The team from NOC are looking forward to contributing to this collaborative international research expedition by bringing some of the most advanced technologies to map the biodiversity of the deep ocean. Only by making use of autonomous and robotic systems will we be able to obtain the samples and observations needed to understand the vast expanse of the deep Atlantic Ocean, and the ecosystems that it holds."

Pedro Madureira, leader of first expedition leg said: “Planning the goals and objectives to be fulfilled with only one week of campaign to the long Azores-Biscay rise has been challenging. But the team is really excited and motivated to dive in such remote areas and to collect data and information that may contribute to increase our knowledge on the geological evolution of the north Atlantic and on the deep-sea habitats and ecosystems that have been developed along important geomorphological features, such as the Azores-Biscay rise. The EMEPC team also acknowledge all efforts made by the leader of the iMirabilis expedition, Dr. Covadonga Orejas, for making this leg possible and for all coordination amongst the different teams that will be onboard the B/O Sarmiento de Gamboa during the next coming weeks.”

Covadonga Orejas, from the Spanish Institute of Oceanography, main expedition leader of the 2nd leg said: “Planning and organising such a complex oceanographic expedition during the pandemic has been challenging. However, the fantastic teamwork at national and international level has been really key to finally making this expedition a reality. The exciting prospect of exploring a relatively unknown area of the Atlantic and a collective enthusiasm to learn more about the deep-sea ecosystems off Cabo Verde have been the main driving forces in keeping the whole team motivated and committed to making this expedition happen.”

Murray Roberts, iAtlantic Project Coordinator said: “We only care about things we know and understand. The deep sea and open ocean covers most of the planet yet remains the least known and understood of all environments on Earth. iAtlantic is taking the pulse of deep and open ocean Atlantic ecosystems. Every day we learn more about how intricate and interconnected these ecosystems are and through iMirabilis2 we have an exciting opportunity to share the deep Atlantic with people across the world. By sharing this understanding and bringing the latest science to policy discussions we can work quickly to better manage human activities – and given the multiple stresses of climatic change we have to work fast to make sure all human activities in the ocean are sustainable.”