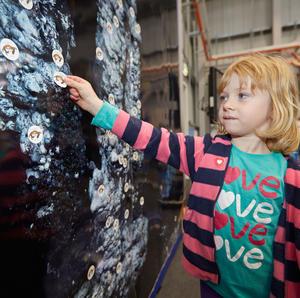 The National Oceanography Centre (NOC) in collaboration with Ocean and Earth Science at the University of Southampton proved that ocean and Earth science and its world-leading technology is high on the agenda across the Solent region, reporting a significant increase in visitor numbers to its 2015 interactive public open day.

The family-focused Ocean and Earth Day event was held on Saturday 25 April at the National Oceanography Centre Southampton , attracting over 2100 visitors, including adults, children and organised groups from as far afield as Surrey, Wiltshire and Dorset – up 24% on last year.

Featuring over 70 stalls and exhibits provided by both NOC and the University of Southampton, the event showcased the valuable and innovative ocean and Earth research projects that the organisations are involved with. It also enabled people to view some of the research facilities and look at the cutting-edge marine robot technology used in scientific research.

Visitors were able to embark on a voyage of discovery through three interactive zones. The Bringing Science to Life Zone which showcased marine research projects, the Oceanography and Engineering Zone gave visitors the opportunity to drive a mini ocean robot and see how 3D printing is making advances in engineering, while the Ocean Cinema Zone showed three new films looking at life on a research ship, a marine robot mission and deep sea exploration.

A key attraction was a case study about the discovery of the ‘Hoff Crab’ which allowed both the NOC and University of Southampton to demonstrate the science, technology and facilities involved in undertaking science in a collaborative way.

Executive Director of NOC, Ed Hill said: “It is great to see that the public have a real interest in the important and varied work that both organisations are involved with, as well as helping to inspire the next generation of scientists and engineers. As I walked around the event I was pleased to see that so many visitors of varying ages were actively engaged in the science and engineering on display – and it also gave me a chance to test my own knowledge in the cinema zone and also the many quizzes on offer.”

Preparations will soon begin for next Ocean and Earth Day event, which will take place next year.