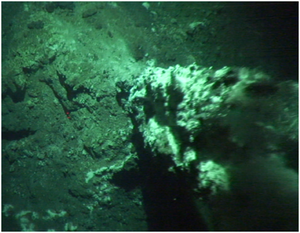 The location of an underwater volcanic vent, marked by a low-lying plume of shimmering water, has been revealed by scientists at the National Oceanography Centre, Southampton.

Writing in the journal PLOS ONE the researchers describe how the vent, discovered in a remote region of the Southern Ocean, differs from what we have come to recognise as ‘classic’ hydrothermal vents. Using SHRIMP, the National Oceanography Centre’s high resolution deep-towed camera platform, scientists imaged the seafloor at Hook Ridge, more than 1,000 metres deep.

The study, funded by the Natural Environment Research Council (NERC), aimed to build on our knowledge of how deep-sea creatures associated with hydrothermal activity evolve and migrate between different regions.

Hydrothermal vents are like hot springs, spewing jets of water from the seafloor out into the ocean. The expelled water, if hot enough, is rich in dissolved metals and other chemicals that can nourish a host of strange-looking life, via a process called ‘chemosynthesis’. The hot water, being more buoyant than the surrounding cold seawater, rises up like a fountain or ‘plume’, spreading the chemical signature up and out from the source.

The Hook Ridge vent, however, was found to lack the high temperatures and alien-like creatures that we now associate with hot hydrothermal vents. Instead there was a low-lying plume of shimmering water, caused by differences relative to the surrounding seawater in certain properties, such as salinity.

“Geochemical measurements of the water column provided evidence of slightly reducing, localised plumes close to the seafloor at Hook Ridge,” said Dr Alfred Aquilina, lead author and former research fellow at University of Southampton Ocean and Earth Science, which is based at the centre.

“We therefore went in with sled-mounted cameras towed behind the Royal Research Ship James Cook and saw shimmering water above the seafloor, evidence of hydrothermal fluid seeping through the sediment.”

So why were there no strange creatures around the vent? The team investigated this particular area of the deep-sea because prior measurements of the water column above Hook Ridge detected chemical changes consistent with a hydrothermal plume. On investigation, there was also a small relict “chimney” of precipitated minerals on the seafloor, which suggests that the hydrothermal fluid flowing from the vent was once warmer.

The researchers therefore propose that hydrothermal activity at Hook Ridge is too irregular to provide the vital chemicals that support chemosynthetic life.

Dr Aquilina explained why this was an important finding “This region was investigated because hydrothermal systems in this part of the Southern Ocean may potentially act as stepping stones for genetic material migrating between separate areas in the world ocean,” he said.

“The more hydrothermal vents we can find and investigate, the more we can understand about the evolution and dispersal of the creatures that live off the chemicals expelled in these dark, deep environments.”

The work was carried out as part of the ChEsSO project, which investigates chemosynthetic environments and associated ecosystems south of the Polar Front. Co-authors are from the University of Southampton Ocean and Earth Science and the National Oceanography Centre.