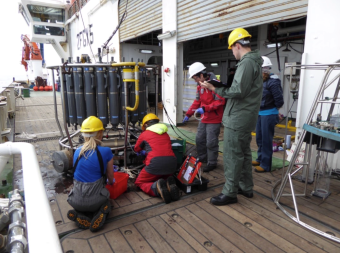 The project will run for six months, in which time the team will develop tools to build a transparent system to advertise available berths on scientific expeditions. The project team hope this will open up more opportunities for early career researchers and technicians, particularly supporting traditionally excluded groups, breaking down barriers for conducting fieldwork in marine science.

Reflecting on the importance of science berth opportunities, the NOC’s Dr Alice Marzocchi, one of the co-leads of FindAScienceBerth, and a case study for the background of the project proposal, said: “Gaining shipboard experience is extremely valuable for early career marine science researchers, including myself. I did my MSc at the University of Southampton in 2011 and for my dissertation I worked with scientists from the NOC, which led to a fantastic opportunity later on to join a research expedition, which was quite a lucky and unique opportunity as it would have been rather difficult for me to join such an expedition through my PhD network. With the FindAScienceBerth project, we aim to open up these opportunities more broadly, going beyond fortuitous connections and existing personal networks that are not equally available to everyone.”

Berths for scientists on research ships are often in short supply, with participation often limited to specific networks within the discipline, which can be a limitation for those pursuing careers in marine science. Although berths can be at a premium, there are other occasions where the ships may sail with free berths still available, for example where sampling requirements on an expedition are at a maximum, but do not require a large number of scientists to complete. In order to explore this, the project team conducted an analysis of expedition reports from the NOC’s British Oceanographic Data Centre (BODC), which discovered that at least one expedition per year had less than 65% occupancy of science berths between 2010 and 2020. Therefore, capacity already exists to increase the number of opportunities available to gain marine science experience.

In order to ensure these opportunities are not lost going forward, the FindAScienceBerth project, which is part of the NERC EDI Digital Sprint Project, will see the development of a tool in the Marine Facilities Planning (MFP) website. The NOC’s Dr Eleanor Darlington, who will be overseeing this part of the project, said: “The tool will be integrated into the existing comprehensive planning process and will draw on up-to-date information on free berths, and advertise to those who may have been previously unaware of the opportunities. The MFP is widely used internationally by research ship operators; the tool will be available for other operators to use, expanding the projects reach.”

The project will also include the development of a transparent and inclusive application process, which will better utilise available berths on existing scientific research expeditions, keeping EDI at the heart of the project.

With the FindAScienceBerth project developing tools and practices for the selection and inclusion of the candidates, other programmes are available to further help early career scientists with on-board opportunities.  One such programme is the Fellowship scheme for Early Career Researchers (ECR), available under the NOC-led CLASS project, which recently announced it had resumed following a suspension due to Covid-19. The scheme supports extended visits to NOC and SAMS and aims to support the career development of ECRs.

Find out more about FindAScienceBerth.

This endeavour supports the NOC’s commitment to improving equality, diversity and inclusion within marine science. Find out more about our people commitments.