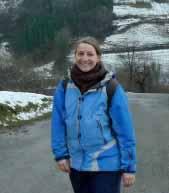 I wasn't expecting to receive this award, but I feel very honoured to be recognised by researchers in my field.

Clara Bolton, a recent PhD student at the National Oceanography Centre, Southampton, has been selected by The Micropalaeontological Society to receive the Charles Downie Award for 2011.

The award is made to recognise the most significant scientific paper published in a given year based on postgraduate research. It will be presented to Clara to commend her research paper entitled ‘Evolution of nutricline dynamics in the equatorial Pacific during the Late Pliocene’, which was featured key journal Paleoceanography.

Clara, who conducted the research while working within the Palaeoceanography and Palaeoclimate research group at Southampton, was supervised throughout her PhD by Professor Paul Wilson and Dr Samantha Gibbs, and funded by the Natural Environment Research Council (NERC).

She says “I wasn’t expecting to receive this award, but I feel very honoured to be recognised by researchers in my field.”

Since completing her PhD in September 2010, Clara has worked as a post-doc researcher on a European Research Council project with Dr Heather Stoll at Oviedo University (Geology Dept.), in northern Spain, investigating coccolith geochemistry and trying to understand algal responses and adaptations to different carbon dioxide concentrations throughout the Cenozoic.

Clara will be formally presented with the Charles Downie Award at the Micropalaeontological Society’s annual meeting in November.