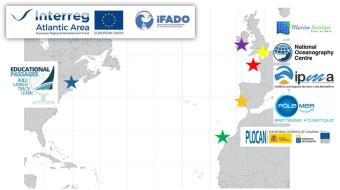 An exciting Educational Passages mini-boat project coordinated by the National Oceanography Centre (NOC) is underway at King Edwards VI School in Southampton this month, engaging students in the world of ocean exploration and key environmental issues.

The collaborative project, involves the building of a satellite tracked 1.5-metre-long un-manned miniature sailboat (“mini-boat”), which will be deployed by NOC scientists in the Atlantic Ocean during the collaborative DY143 expedition in December, which is led by the Centre for Environment, Fisheries, and Aquaculture Science (CEFAS).

The mini-boat, named ‘KES Kraken’ by the students, will be built over a number of weeks as part of a hands-on afterschool project. Students will equip it with a sail and a satellite tracker, that will allow them and the public to track the boat’s ocean journey. The mini-boat will also be one of the first to include a new sensor system which will also allow the boat to collect additional data about the ocean once deployed, which will allow the students to gain a better understanding of ocean currents, weather and technology. If the boat lands, the students will also have the opportunity to connect with a local school and community in the boat’s destination, allowing them to learn more about cultures around the world.

Ms Cassie Stymiest, Executive Director of the non-profit Educational Passages in the US, kicked off the series on 13 September with a talk about the Miniboat Program, sharing stories of other miniboat adventures. “It was great to meet the KES crew for this project,” she said. “They were quite enthusiastic and seemed pretty jazzed about the voyage of the Galway Sailor, which landed in Norway earlier this summer. Projects like this are really important for helping us all better understand our connection to the ocean and each other.”

The King Edwards VI School project, is part of the wider iFADO (Innovation in the Framework of the Atlantic Deep Ocean) project team, which will see the launch of five mini-boats this year around the Atlantic from Ireland, Portugal, Spain, France, and the United Kingdom. All the boats can be tracked online at the Educational Passages website. The production of the boat is funded primarily by part of the EU Interreg iFADO project, which aims to engage the public with initiatives such as the Educational Passages Miniboat Programme.

Talking about the NOC’s involvement in the programme, Dr B.B Cael, part of the Ocean BioGeosciences group at the NOC, said: “We are really excited to be working alongside the wider iFADO team to engage young people in oceanography in this unique way – it’s so important to inspire people from a young age, especially on crucial environmental issues like climate change and microplastics that they might not otherwise be exposed to in school.”