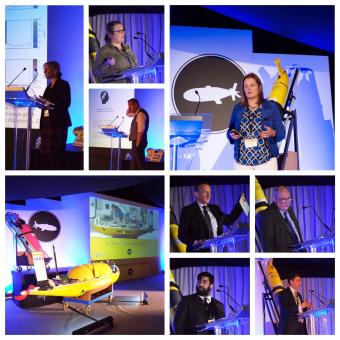 The three-day event included 50 keynote and technical presentations describing the latest developments in marine robotic technology, and provided an effective forum for networking and discussion between delegates.

Kevin Forshaw, NOC Associate Director for Innovation and Enterprise, said: “The NOC’s Marine Autonomous and Technology Showcase 2017 was our biggest yet, welcoming over 250 guests from eight countries to share ideas, knowledge and experiences around developing the next generation of marine robotic systems. MATS is a great showcase for the pioneering work that the NOC is delivering in the field of marine robotics, for the benefit of industry and the wider science community. The event is also a celebration of new and existing partnerships, and a genuine catalyst for innovation in the sector.”

Attendees came from a wide range of sectors and organisations, including research centres, universities, multi-national corporations, small businesses, and government departments and agencies, enabling technology manufacturers and developers to meet with scientists, researchers and other end-users.

MATS 2017 followed hot-on-the-heels of the announcement that NOC is receiving a £19 million investment in marine robotic platforms and sensors as part of the Industrial Strategy Challenge Fund (ISCF), which will be delivered under the Oceanids programme.

Prof Russell Wynn, NOC Chief Scientist for Marine Autonomous and Robotic Systems, said: “MATS provides a great opportunity to update our partners and the wider end-user community on the Oceanids programme, and also enables us to learn from the experiences of others who are developing these technologies. This sharing of experience is vital if we are to fast-track the deployment of marine robotics to tackle environmental challenges in the ocean, such as over-fishing, chemical and noise pollution, and climate change impacts.”

The showcase has gone from strength to strength since it launched in 2015, and feedback from delegates and speakers has been overwhelmingly positive. Plans are therefore already well underway for next year's event, which will take place in November 2018.

Hear some of the comments from attendees in the videos below.