Estimating the cost of flooding for communities around estuaries 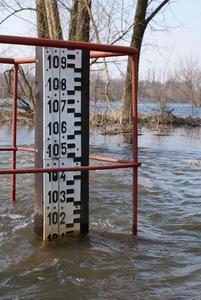 The National Oceanography Centre (NOC) and the University of Liverpool have developed a new visualisation tool to predict the maximum cost of coastal flooding to communities around estuaries.

This method, published in PLOS One, works by combining high impact flooding scenarios with land use maps. Researchers used this method to find that the economic damage of coastal flooding increased much more than expected with the size of the flood.

Combining a model for flood inundation with one that simulates the effect of waves means that it is possible to estimate how likely it is that sea defences will be ‘over-topped’ in a changing climate. This threshold is based on a plausible amount of sea-level rise by 2100. The highest recorded river level was also added to this model to give an overall ‘worst-case scenario’ of flooding for communities around estuaries. 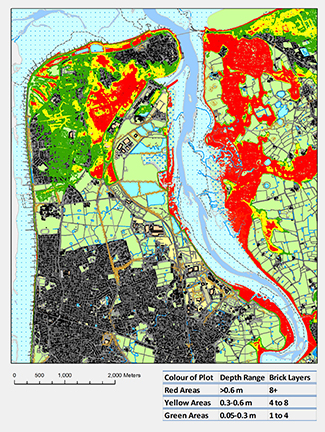 A new tool then relates the model output in terms of how many brick layers the flood water will reach, this can then be easily related to possible mitigation options for the different water levels.

The lead author of this study, Thomas Prime, from the University of Liverpool, said “By showing how high the flood water could rise in terms of brick courses, and providing a corresponding estimate of economic damage, these new maps can help residents see the impact of low probability flooding scenarios.”

An estimate of the economic damage of the flood is obtained by relating the water depth predicted by this method with the land use maps. This information is then fed into ‘depth-damage curves’, which are used to give a value for the economic damage of flooding for a given water depth and land use type. For example, arable land under five meters of water or residential property under three metres.

Dr Jenny Brown, co-author of this study from the NOC, said “This research is an example of the NOC’s commitment to developing transferable science that benefits coastal communities through the provision of evidence in support of flood risk management.

This new visual representation of flood hazard identifies areas at risk, allowing improved adaptive management – increasing community resilience to climate change and rising sea levels. This work leverages the expertise in marine hazards from across NOC, and our external collaborators, to assess flood risk to a coastal community from extreme waves, water levels and projected rises in sea level.”