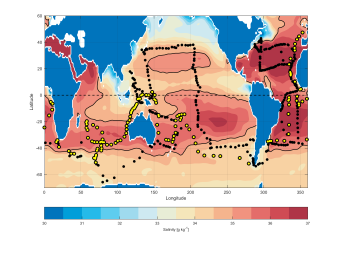 For the first time, scientists have used ocean measurements taken on research voyages almost 150 years ago to learn more about how human activity has impacted climate change.

Scientists from the National Oceanography Centre (NOC) and the Scottish Association for Marine Science (SAMS) have made the first combined study of water density measurements from the British HMS Challenger and Prussian SMS Gazelle round-the-world research expeditions in the 1870s to draw parallels with modern-day measurements. The two ships, which circled the world independently provided new insights into the biology, geology, physics and chemistry of the oceans.

Their two contributions have been brought together to give an insight into the impact of the industrial age on Earth’s climate. The study is the first global-scale analysis of salinity from these two expeditions and the first observational evidence of changes in the global water cycle since the late 19th century.

With no baseline measurement for salinity pre-1950s, Dr John Gould from NOC and Professor Stuart Cunningham of SAMS have converted these density measurements into salinity and were able to show that the planet’s water cycle has increased in intensity, just as the global temperature has risen.

The findings, published in the journal Nature Communications in Earth and Environment, confirm that there has been an increase in evaporation from saltier parts of ocean, such as the Atlantic, and more rainfall in fresher areas. In effect, changes in the salinity pattern of the oceans have been used as a global-scale rain gauge.

Now this trend has now be found to extend back to the 1870s, early in the industrial age, and to have been 50% less intense before the 1950s than since that decade.

The water cycle is extremely sensitive to environmental changes. A rise in global temperature of just one degree Celsius will result in a 7 – 8% increase in water vapour in the atmosphere.

Earth’s average temperature has warmed by over 1°C since the 1950s, and this accelerates the water-cycle. Patterns and intensity of rainfall over land are changing: deserts are expanding; the UK is suffering more intense rainfall and flooding.

NOC Emeritus Scientist, Dr John Gould, said, ”When we started this study we did not know whether these measurements, taken with simple instruments, would be good enough to be of scientific value. In fact they have given us an insight almost into the pre-industrial age. In the 1870s atmospheric CO2 levels were 285 ppm (parts per million), hardly changed from 1000 years before. They are now approaching 420ppm.  Our results provide an early baseline against which future changes in the water cycle can be compared”.

SAMS oceanographer Prof Stuart Cunningham said: "Our blue planet is fundamental to Earth’s water cycle, which is the processes of evaporation, precipitation and river run off, transferring water between the oceans, the land and vegetation. Studying how the ocean’s surface salinity pattern is changing tells us about changes in Earth’s water cycle and is vitally important to humans and our survival.

"The ocean, and the way it moves, is the main influence on our global climate. If we are to predict what our weather and climate will look like in decades to come, we must better understand our blue planet."