What happens ‘If We Don’t Act Now’ on climate change? 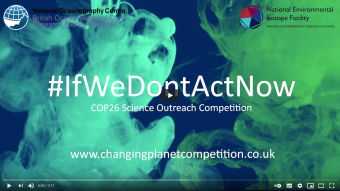 Climate change researchers around the world are being encouraged to create videos addressing their environmental concerns and potential solutions ahead of the COP26 conference.

The call to action is part of a new competition called ‘If We Don’t Act Now’. Entrants to the competition will have the chance to see their videos displayed for delegates at COP26 in November.

The competition calls for climate researchers to create three videos totalling three minutes in duration, which can be shared on Twitter with the hashtags #IfWeDontActNow and #NEIFBOSCORFCOP26.

The first 30-second video must begin with the phrase ‘If we don’t act now’ and discuss the entrant’s concerns about a specific element of climate change. The second, two-minute video should explore the scientific evidence for their concern in non-technical terms. The final 30-second video will outline a solution – a personal or professional contribution to tackling the problem.

The entries will be judged by a panel of experts including Professor Julie Fitzpatrick, Chief Scientific Adviser to the Scottish Government, and Professor Chris Jackson of Imperial College London, as well as the heads of the supporting organisations.

The highest-rated entries will be on display in the COP26 Green Zone during the COP26 conference at UK Research and Innovation’s stand. The entry judged to be the best overall will grant the winner two days’ access to NERC-funded analytical facilities run by NEIF or BOSCORP. The prize can be used for a project of the winner’s choice.

The competition was developed by Professor Darren Mark and Dr Millie Bompard of SUERC, where they use cutting-edge analytical techniques to help researchers from around the world understand the historical and current impacts of climate change.

Dr Bompard said: “The recent publication of the Intergovernmental Panel on Climate Change’s latest assessment of the impacts of global heating has provided a stark warning of the challenges facing the planet in the coming decades.

“However, there is still opportunity to mitigate some of the worst-case scenarios before they occur, and scientists around the world will have key roles to play in helping us minimise our future emissions.”

Professor Mark added: “If We Don’t Act Now is open to academics from all disciplines because effective climate action requires expertise from across the spectrum of research expertise.

“We hope that the competition will provide a valuable platform for researchers to explain their concerns, their work, and their solutions to a general audience, as well as to COP26 policymakers and politicians who could have the power to make their suggestions happen.”

If We Don’t Act Now is open to active researchers, at first-year PhD level and above, from any institute, in any country. Entries can be submitted from Wednesday 1st September until Friday 1st October.