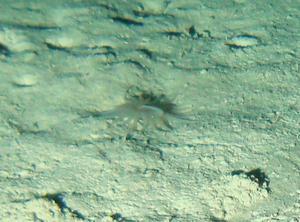 The surprising culinary preferences of an abyssal sea anemone have been unveiled by a team of scientists from the National Oceanography Centre (NOC).

New time-lapse photography of the abyssal sea floor shows that this type of anemone can eat animals up to six times its weight and moves around the ocean floor by burrowing. The lead author of this study, Jennifer Durden, a PhD student at the NOC, explained that these heavy meals can take the anemone up to 80 hours to digest. The abyss is the term given to any area of the sea floor below 3000 metres from the sea-surface.

Jennifer said “Finding out new things about this anemone is really exciting! It was found more than 15 years ago, but we didn’t know what it ate or how it moved around. We also didn’t know that it was the most common animal at the site – it makes up half of the creatures there. These observations are really important for understanding life on Earth, since the ocean’s abyssal seafloor makes up more than 50% of the planet’s surface. They would not have been possible without the technology and commitment to long-term ocean observing by NOC.”

A combination of photos taken from the UK’s deepest diving robot-sub, Autosub6000, and time-lapse photography enabled Jennifer to count the animals and to observe their behaviours, in a way that has not previously been possible.

Dr Henry Ruhl, the principal investigator on the project said “This research shows how the technology developed at the NOC enables us to continue to learn basic things about one of the most well studied deep water research sites.”

The discovery was made in the three mile deep Porcupine Abyssal Plain (PAP), about 300 miles west of Land’s End. NOC’s observatory at the site has been the focus of extensive research for over 25 years. This makes it the one of the longest running deep-sea ecology observing programmes globally.

These photographs were taken as part of the Autonomous Ecological Surveying of the Abyss project, funded by the Natural Environmental Research Council (NERC). This project aims to understand the spatial distribution of abyssal animals, and therefore their importance in deep sea ecosystems. The project is creating a map of the sea floor made up of ‘stitched’ together photographs, not unlike a Google Earth map. A team of scientists at NOC are still analysing these pictures, so there are more discoveries yet to come.

The ongoing research at the PAP site is funded by NERC National Capability funding.