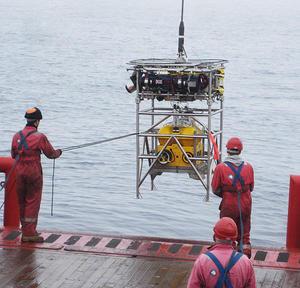 A shipboard expedition off Norway, to determine how methane escapes from beneath the Arctic seabed, has discovered widespread pockets of the gas and numerous channels that allow it to reach the seafloor.

Methane is a powerful “greenhouse” gas and the research, carried out over the past week aboard the Royal Research Ship James Clark Ross, will improve understanding of its origins in this area, its routes to the sea floor and how the amount of gas escaping might increase as the ocean warms. This could have important implications for global climate change and ocean acidification.

At the high pressures and low temperatures which are found at the bottom of the deep ocean, methane gas and water combine to form a solid, crystalline substance: methane hydrate. It is very widespread in the parts of the deep ocean nearest to the continents. If the ocean warms, the hydrate can become unstable and methane gas is unlocked and can make its way into the ocean, forming plumes of bubbles.

A research cruise to the same area in 2008, also aboard RRS James Clark Ross, discovered numerous such plumes, as well as evidence for the presence of gas and the movement of fluids beneath the seabed. What was unclear though was how the gas was escaping into the ocean.

The current expedition is led by the University of Southampton’s Professor Tim Minshull, who is based at the National Oceanography Centre, Southampton. The shipboard team, which includes scientists from the National Oceanography Centre Southampton, its French counterpart, the French Research Institute for Exploration of the Sea (Ifremer) and the University of Tromsoe in Norway, used a range of new technologies to probe the seabed beneath areas where methane gas was found to be escaping, due partly to recent warming of the ocean.

Ifremer’s SYSIF sonar system produced detailed images reaching 100 to 200 metres beneath the seafloor, which show how gas is in some places trapped and in some places is travelling upwards through narrow fractures and pipes to the seafloor. A seismic system towed across the sea surface provided images of deeper gas pockets beyond the reach of the towed sonar.

Professor Minshull, who is Head of Ocean and Earth Science at the University of Southampton, said “Methane gas escaping from the Arctic seabed might make an important contribution to global climate change, but we need to understand the origin of this gas and its escape route to work out how the amount of gas escaping might change as the ocean warms. We now have very clear images of the gas escape routes and also of many places where gas is trapped and not yet escaping.”

Some of the team will return next summer to work with an electromagnetic sounding system that will allow better estimates to be made of the amount of methane stored beneath the seabed in this sensitive area.

The work forms part of an international effort involving scientists in Britain, France, Germany and Norway that has brought research vessels to the same small area every year since 2008, including two vessels in 2011. The expedition was one of two in this area this year funded by the Natural Environment Research Council.