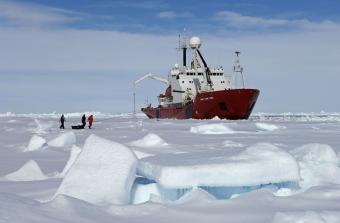 A new £10 Million research programme to investigate how the Arctic Ocean is changing kicks off today with its first research expedition to the Barents Sea. Over 20 researchers from 16 UK research institutes join forces to understand the knock on effects of rapid warming and sea ice loss in the Arctic region.

Some of the clearest signs of change are the thinning and retreat of sea ice and the migration of species into the Arctic that normally live at lower latitudes. These changes are likely to have an unprecedented impact on how the Arctic ecosystem operates. For example, as the fastest warming oceanic region in the world, the Arctic could be free of sea ice in summer within a few decades. This change is likely to affect the UK climate and economy, with anticipated impacts on industries like tourism and fisheries.

The UK scientists will contribute to international efforts to build a comprehensive picture of the constantly changing Arctic environment. They will look at a wide range of complex interactions between different organisms in the ocean and at the seafloor. Robotic underwater vehicles will also be deployed to collect data near the edge of the sea ice. Hundreds of litres of seawater will be filtered to capture phytoplankton, and special plankton nets will capture zooplankton, small animals that are an essential food source in the Arctic.

Dr Jo Hopkins, from the National Oceanography Centre and Principal Scientific Officer on the ship, said: “This is an exciting and ambitious first research expedition that will collect a vast amount of information about Arctic water and sediments and the life they support. Improving our understanding of how the Arctic ecosystem functions today will help us better predict and manage how it may change in the future.”

The ultimate goal of Changing Arctic Oceans is to generate a better understanding of the Arctic so models can more accurately predict future change to the environment and the ecosystem. Within the Programme itself there are 76 scientists, with the lead investigators from the Scottish Association for Marine Science (SAMS) and the Universities of Leeds and Liverpool.

Four projects cover different aspects of the programme’s goals: the way change in the Arctic is affecting the food chain, from small organisms at the bottom to large predators at the top (the ARISE project), how warming influences the single main food source at the bottom of the food chain (DIAPOD), the effect of retreating and thinning sea ice on nutrients and sea life in the surface ocean (Arctic PRIZE) and on the ecosystem at the seafloor (ChAOS). Details of the research expedition and the research programme can be found at www.nerc.ac.uk/research/funded/programmes/arcticocean and http://arcticarise.wordpress.com.

Dr Christian März, University of Leeds, describes the project he leads: “Our ChAOS project will focus on the bottom of the Arctic Ocean, the seafloor, which is by no means the boring, dark environment it might be perceived as. It is, in fact, a complex ecosystem teeming with life, and it plays an extremely important role in Arctic biodiversity, food webs, the recycling of nutrients back into the overlying water, and the long-term burial of the greenhouse gas carbon dioxide as dead organic material. Our ChAOS team will, without doubt, have the muddiest job on the upcoming RRS James Clark Ross expedition, but someone needs to do it (and we love it).”

Prof. Finlo Cottier, who leads the Arctic Prize project and is based at SAMS: “We will be working closely with Norwegian collaborators to study the relationship between ice, ocean, nutrients, and biological communities during the transition from the dark Arctic winter to the sunlit Arctic summer. We’ll be making use of UK capabilities in robotics and working on UK and Norwegian research ships to make sustained observations of important processes in the Barents Sea. The international angle is essential to achieve world-leading science in the Arctic.”

Dr Claire Mahaffey, from the University of Liverpool and leader of the ARISE project, says: “The ARISE project is looking at how environmental change affects Arctic food webs. To do this, we will use novel biological markers or ‘biomarkers’ present in marine animals and plants that record changes occurring in their habitat. By measuring these in seals at the top of the food chain and in phytoplankton and zooplankton at the base of the chain, we can gauge the extent to which the environment is responding to Arctic climate change. On this cruise, we are going to focus on the base of the food web, and we will be filtering lots of seawater to capture phytoplankton and zooplankton in the Barents Sea. The data we collect will contribute to larger datasets collected by our international collaborators across the Arctic. We will use the data in statistical and biogeochemical models to assess how much change has occurred in the food webs across the Arctic and the reasons for the change.”

Professor David Pond, who leads DIAPOD and is also based at SAMS: “Our project is trying to unravel the mechanisms behind one of the largest migrations of biomass of Earth, the sinking of millions of tiny organisms called copepods each autumn from surface waters to great ocean depths to hibernate over winter. We still do not know what triggers their migration to depth or what factors wake them up again to re-ascend to the surface the following spring. The DIAPOD team will be collecting samples to examine the chemical composition of the microscopic food of copepods to determine if there are key components that these organisms need before they can enter hibernation.”