Tides stir up deep Atlantic Heat in the Arctic Ocean 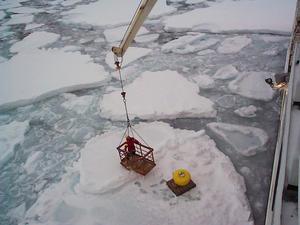 Research led by the National Oceanography Centre (NOC), in collaboration with the University of Bangor, have identified how warm Atlantic water that is flowing deep into the Arctic Ocean is mixing with colder waters above to contribute to sea-ice loss in the Arctic.

The results, published today in the Journal Nature Geoscience, show that tidal flows in the Arctic are causing deep, warm water (originating from the Gulf Stream) to mix with cold, fresh water lying above, in turn contributing to melting the floating sea-ice.

Past research on how warm layers of ocean water mix with cold layers lying above has focused on turbulence driven by winds and waves, rather than on tidal mixing, since tidal flows around the Arctic Ocean are generally weak. However, direct measurements of turbulence from across the seasonally ice-free Arctic Ocean show that tidal motions interacting with steep sea bed slopes are in fact a major cause of vertical mixing.

Lead author, Tom Rippeth from Bangor University, explains “Our oceans are not made up of one body of water, but contain waters of different temperatures and salinity, lying in different ‘layers’, so the Arctic Ocean is a bit like a jam sandwich, where the “bread” is the cold water layers above and below the “jam”, which is the warm, salty water that enters the Arctic from the Atlantic.  Sea-ice floating on the surface of the ocean is insulated from the heat of the Atlantic layer by the “top slice” of cold polar water.

“We studied the warm body of water from the Atlantic that represents the largest oceanic input of heat into the Arctic – it is four degrees Celsius warmer than the surrounding water, and it is the warmest it has been in nearly two thousand years. The top of the warm layer sits at depths between 40 and 200 m, and its heat slowly diffuses upwards into the cold, fresher water above, but sometimes this movement of heat can be greatly accelerated by turbulence which drives mixing. We have found that tides are producing significant amounts of turbulence over steep sea bed topography, and so are greatly enhancing the upward movement of heat in these regions. In areas where tidal currents interact with steep sea bed slopes, this process causes mixing of the warmer waters with the over-lying colder waters, and this in turn can generate ‘hotspots’ for sea-ice melt or thinning.”

Sheldon Bacon, from the NOC, who is leading this research project, says, “Arctic sea ice is likely to retreat further in coming decades, and if it does, interactions between the wind and ocean currents may strengthen. These mixing hotspots may then grow into other areas of the Arctic Ocean with steep sea bed slopes, resulting in further sea-ice retreat. We know that the Arctic is already warming faster than the rest of the planet, and other research conducted in the past few years is pointing to the impact of Arctic warming on mid-latitude weather. So the Arctic may have had a role in recent weather extremes in the US, UK and Europe. Therefore the importance of this new mechanism, for moving heat up towards the surface of the Arctic Ocean, lies in its potential to further enhance Arctic warming.” 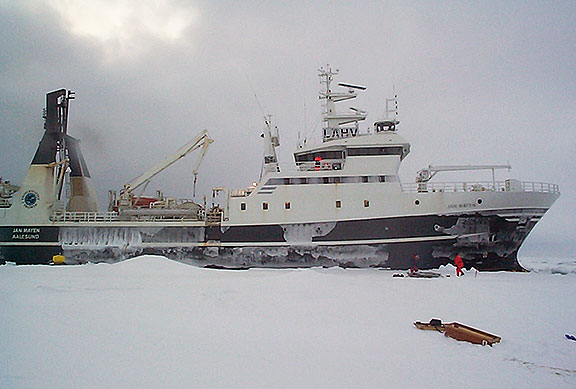 Bangor University, the Norwegian Polar Research Institute (NPI) and the (NOC) collaborated on four extensive Arctic research cruises covering the Arctic Ocean north of Svalbard, north of eastern and western Siberia, and in the Canada Basin. This was done by directly measuring turbulence around the Arctic Ocean and showing its direct correlation with tidal energy dissipation estimates made using satellite data.

The new research is part of the TEA-COSI consortium project (The Environment of the Arctic: Climate, Ocean, Sea Ice: http://teacosi.org), led by Sheldon Bacon. The project is a component of the Arctic Research Programme, a £15m programme to enhance the UK’s research effort in the Arctic, funded by the Natural Environment Research Council (NERC).