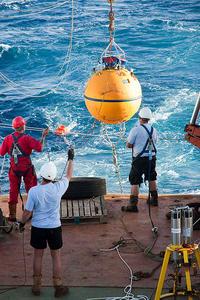 A ground-breaking project to observe and analyse regular data about ocean circulation and how it impacts on Britain’s climate has reached a ten-year milestone, giving valuable new insights into how ocean currents can affect global warming.

The Atlantic Meridional Overturning Circulation (AMOC) is a major system of currents in the North Atlantic, and monitoring changes in its movement is important for understanding climate variability and change, including the severity of Britain’s winters.

The project, coordinated by scientists at the National Oceanography Centre (NOC), was set up in 2004 under the Rapid Climate Change Programme (RAPID). This £20 million research project, funded by the Natural Environment Research Council (NERC), aims to better understand the changes to the AMOC and how it can affect the UK’s mild temperatures.

From 2004, the project team has been monitoring the AMOC at 26.5°N, near where it carries its maximum heat, using scientific instruments moored at 30 locations across the Atlantic between the Canary Islands and the Bahamas – so-called fixed arrays. The arrays’ instruments measure the temperature, salinity and pressure of the ocean, from which the AMOC’s strength and structure can be calculated.

Twice-daily estimates of the AMOC have been made every day since the start of the project, providing a significant increase in recorded data. Prior to this, measurements had only been taken during five separate ship surveys – one survey every ten years since the 1950s. The data collected is then calibrated and analysed to see what changes have taken place.

Until recently it had been widely thought that the AMOC couldn’t be measured in such a consistent way, and there have been some surprising findings.

Firstly, it had been thought that the strength overturning of the AMOC would weaken due to climate change. However, the ocean sensors have detected that the AMOC is now declining faster than anticipated (Smeed et al., 2014), which could potentially have a long-term impact on Britain’s climate.

Secondly, the results revealed that the AMOC was significantly more variable than had been previously thought. Thirdly, the data also appeared to confirm that the AMOC had a direct impact on Britain’s winter weather, which could be specifically seen with respect to the harsh winter of 2010–11. The measurements showed that the strength of the AMOC in 2009–10 was much lower, which affected sea surface and atmospheric temperature, and seemed to directly affect Britain’s weather months later. The slowdown in the AMOC in 2009–10 also raised sea levels in New York by 13cm, four times the global average sea level rise.

Speaking about the ten-year milestone, NOC Research Scientist, Dr Gerard McCarthy said “The findings from the project to date have been really exciting and surprising. The data that we’ve been collecting has helped to build a bigger picture of how the AMOC is changing and the impact this can have on our climate here in the UK. We are continuing to analyse these important data and are planning even more advanced collection techniques going forward.” 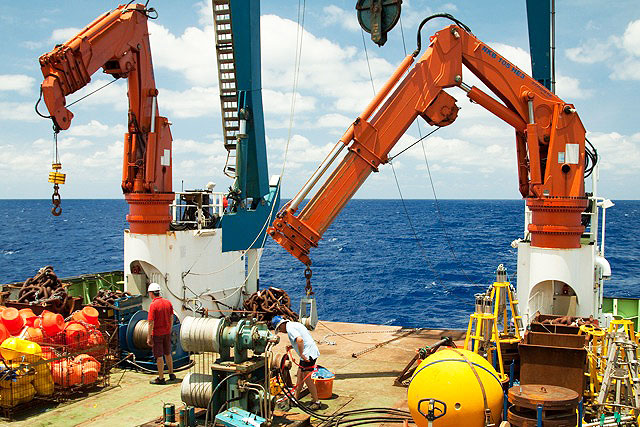 The team at NOC are working in collaboration with scientists from the National Oceanic and Atmospheric Association (NOAA) and the University of Miami in the USA.

The project is set to continue acquiring data, as its NERC funding has been extended until 2020. The raw time series data are available for viewing on the RAPID website.