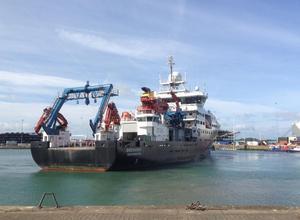 To improve long-term understanding of weather and global environmental change, the Royal Research Ship Discovery is leaving Southampton tomorrow for a six week expedition to the Bahamas.

A team of scientists from the National Oceanography Centre (NOC) are on board to update and acquire data from an array of instruments in the ocean, between the west coast of Africa and the east coast of the USA. Currently data from these instruments, referred to collectively as the RAPID array, are gathered once every 18 months by a research ship. This data is fed into models of the ocean and the atmosphere that help make long-term forecasts of weather and climate.

However, on this expedition researchers from the NOC will be testing a new system able to retrieve data every two to three months using ‘data pods’. Once these data pods have been deployed from the RRS Discovery they will be anchored on the seafloor to enable them to collect data there. After three months of data they will be released and allowed to float to the surface, where the data can be relayed to scientists via satellites.

The RAPID array is currently collecting data on the water temperature, salinity and flow rate of the world’s largest ocean conveyor current. This Atlantic Meridional Overturning Circulation (AMOC) is responsible for the transfer of a great deal of heat from the tropics to north west Europe, keeping it relatively mild. The energy involved in this heat transfer is equivalent to 35,000 times the average rate of electricity consumption in the UK or about a million times the output of an average UK nuclear power station.

In 2009–10 a slow-down of the AMOC caused sea levels in New York to rise by 13cm, which caused widespread flooding and erosion on a scale similar to a hurricane. If scientists had access to real-time RAPID data in 2009 they may have predicted this up to two months in advance. RAPID data assimilated into meteorological models might also provide early warnings of extreme seasonal weather, such as the cold UK winters of 2009 and 2010. Data from the most recent expedition to the RAPID array enabled the NOC team to estimate that AMOC had declined by 20% since measurements began in 2004, which has important implications for the world’s climate. Recent studies have indicated that this decline could also be the cause of the ‘cold blob’ - an area of the North Atlantic colder that the surrounding ocean.

Another new piece of equipment to be tested on this expedition is the ‘remote access samplers’, which aim to improve the RAPID array by enabling it to make the first continuous estimates of carbon transport in the Atlantic. This is important because the North Atlantic contains more anthropogenic sourced carbon than anywhere else in the world.

Dr Elaine McDonagh from the NOC, who is leading the Atlantic Biogeochemical (ABC) Fluxes project responsible for this enhancement, said “This is a really exciting development that will give us the opportunity to learn a great deal more about the role of the ocean in absorbing atmospheric CO2, and how that may change in the future. Previously we could only get measurements of carbon and nutrients across AMOC once every five years. ABC fluxes will allow us to monitor large scale transport of carbon and nutrients over an extended period for the first time.”

Using an improved understanding of the AMOC enabled by the decade long RAPID data set, scientists have been making predictions about the data that will be retrieved from Discovery’s expedition. You can see their estimates on the RAPID Challenge Blog where updates on progress of the cruise will also be published.

RAPID was set up in 2004 and has received £20 million from the Natural Environment Research Council (NERC). NOAA and the Met Office are both project partners on ABC Fluxes, which is made of the NOC, the Universities of Southampton and Exeter, as well as the Plymouth Marine Laboratory. ABC fluxes has received NERC directed funding under the RAPID-AMOC program and will run for six years, until the 31st of September 2020.