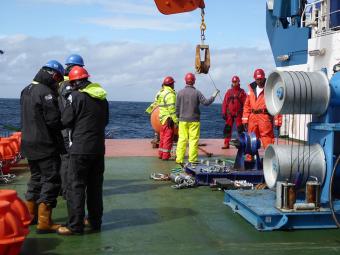 This is a really exciting project which should help us to properly get to grips with how the circulation in the subpolar North Atlantic works, and the role it plays in the climate system.

Funding has been announced for a major project aimed at improving understanding of an ocean region important for climate predictability.

The SNAP-DRAGON project will see NOC scientists work alongside colleagues from Oxford, Southampton, Reading, Liverpool, Oban, and the US, to study the subpolar North Atlantic Ocean, which stretches between the UK, Greenland and Canada. The project is funded by the Natural Environment Research Council (NERC) and National Science Foundation (NSF).

Heat released from the subpolar North Atlantic influences the storm track that determines weather in Europe. Furthermore, the sinking of ocean water in this region carries heat and carbon down into the ocean interior, away from the atmosphere.

The SNAP-DRAGON project will provide new knowledge of the subpolar North Atlantic, which will help to improve predictions of ocean and climate variability.

Associate Professor Helen Johnson from Oxford Earth Sciences, who is leading the project, said “This is a really exciting project which should help us to properly get to grips with how the circulation in the subpolar North Atlantic works, and the role it plays in the climate system.”

Scientists at the NOC will lead the analysis of the OSNAP and other observations. A team at Oxford University will take the lead on using state-of-the art numerical models to probe the ocean physics responsible for variability and change. The SNAP-DRAGON team includes scientists at several US institutions and partners from a range of European institutions. It will bring observations and models together in a range of innovative ways to produce a step change in our understanding of the causes of subpolar ocean variability, their implications for ocean and climate predictability in this region, and the degree to which we can trust their representation in climate models.