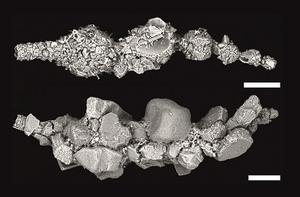 Fossil foraminifera could be used to identify ancient ‘hilly’ environments on the ocean floor, according to research published in Marine Micropaleontology by scientists at the National Oceanography Centre (NOC) and The University of Southampton.

This study has shown that the changes these single-celled shelled organisms undergo in deep ocean currents render their fossilized counter-parts useful in identifying ancient environments characterized by such currents. Hilly terrain on the ocean floor is a key example of such an environment and is thought to represent the single largest habitat on planet Earth.

Conditions in these elevated ‘habitats’, such as current flow, sediment particle size and food availability differ from those on the surrounding plain, and these differences have an effect on the foraminifera. This is because Agglutinated foraminifera construct a shell out of grains they acquire from the surrounding environment. They are extremely diverse and abundant in the deep sea, contributing substantially to the biodiversity and carbon economy of the deep-ocean floor.

The lead author of this project, NOC PhD student Paris Stefanoudis, explains “We already knew that some species of agglutinated foraminifera have the extraordinary ability to select grains based on their size, shape or composition. In this study we demonstrated that forams altered their shell characteristics (i.e., morphometry, particle size composition) depending on whether they live on the hills or the plain, reflecting the contrasting environmental conditions prevalent in these two settings.”

The researchers on this project believe that their findings might stimulate the use of fossil foraminifera as proxies for the recognition of ancient abyssal hill environments, as well as other palaeoceanographic settings that were characterised by enhanced current flow.

This research was funded by the Natural Environmental Research Council (NERC) through the PAP-SO and AESA projects.