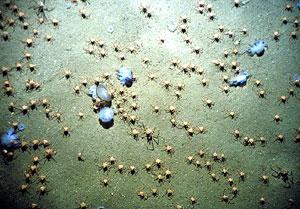 The skeletons and carcasses of marine animals provide discrete habitats where other creatures can thrive.

Some regions of the deep ocean floor support abundant populations of organisms, despite being overlain by water that contains very little oxygen, according to an international study led by scientists at the National Oceanography Centre, Southampton. But global warming is likely to exacerbate oxygen depletion and thereby reduce biodiversity in these regions, they warn.

The sunlit surface waters tend to be well oxygenated as a result of their connection with the atmosphere. Here, tiny marine algae called phytoplankton thrive. When they die and sink, they are degraded by bacteria, using oxygen from the water column.

In regions of high plant growth, this can result in the natural development of mid-water oxygen minimum zones (OMZs), especially where oxygen is not replenished by mixing of the water column. Where they touch the continental slope, OMZs create strong seafloor oxygen gradients at depths between 100 and 1000 m.

In addition to low oxygen, sediments within OMZs often contain large amounts of organic matter. As a result, species of animals and protozoans (foraminifera) that can tolerate low oxygen may flourish, despite the stressful conditions. However, if oxygen depletion is very severe, many types of animals disappear. Where animals are present, OMZs provide a variety of habitats created by steep gradients in oxygen and sulphide concentrations, different seafloor types, and variations in acidity and nutrient availability.

In this new synthesis, based on a survey of published and unpublished data, the team of researchers analysed the habitats and biodiversity of well-developed OMZs in the Arabian Sea, eastern Pacific and Bay of Bengal.

On some continental margins, exposed rocks support encrusting animals, while muddy regions with organic-rich sediments support tube-living organisms and bacterial mats. Movements of the upper boundaries of OMZs, caused by seasonal or longer-term climatic changes, may cause sudden shifts in community composition.

The activities and bodies of some organisms also create opportunities for others. Even the dead play their role.

“The skeletons and carcasses of marine animals provide discrete habitats where other creatures can thrive,” said NOCS’ Dr Brian Bett. “For example, scavengers such as shrimp-like crustaceans exploit accumulations of dead jellyfish, fish and crabs, while other species live off whale bones.”

Although the upper boundaries of OMZs can move up and down in response to climatic changes, the core regions of OMZs are typically very stable, persisting over geological timescales.

“OMZs may be a cradle of biological diversity, promoting speciation by creating strong gradients in the environmental conditions that are important for species as well as barriers to population exchange,” explained Gooday, while acknowledging that this needs to be fully investigated using molecular techniques.

However, global climate change presents a major threat – “Increased ocean temperature is expected to reduce vertical water mixing and decrease oxygen solubility in seawater,” said Bett. “If this results in larger, more intense OMZs, the impact on biodiversity is likely to be negative.”

The research was the product of a workshop organised by Prof. Lisa Levin (Scripps Institution of Oceanography) within the framework of COMARGE, a project of the Census of Marine Life. NOCS researchers were also supported by the HERMIONE project funded by the European Commission’s Seventh Framework Programme under the priority ‘Deep-Sea Ecosystems’, and the Natural Environment Research Council, UK, project Oceans 2025.

Image: Abundant populations of the deep-sea spider crab Encephaloides armstrongi from c. 1000m (lower boundary OMZ) in the Gulf of Oman and the dead bodies of large upper-ocean jellyfish (Crambionella orsini) which can occur in plague proportions in the Gulf of Oman.