A new, state-of-the-art research ship for UK marine science – RRS Discovery – was named by Her Royal Highness The Princess Royal at the National Oceanography Centre in Southampton on Thursday, 10 October 2013.

Around 200 guests, including the Science Minister David Willetts, local MPs, civic guests and senior figures from the UK’s marine science community were present to see a bottle of champagne smashed in the traditional manner on the vessel’s bow.The Honorary Assistant Bishop of Winchester, the Right Reverend John Dennis, blessed Discovery. 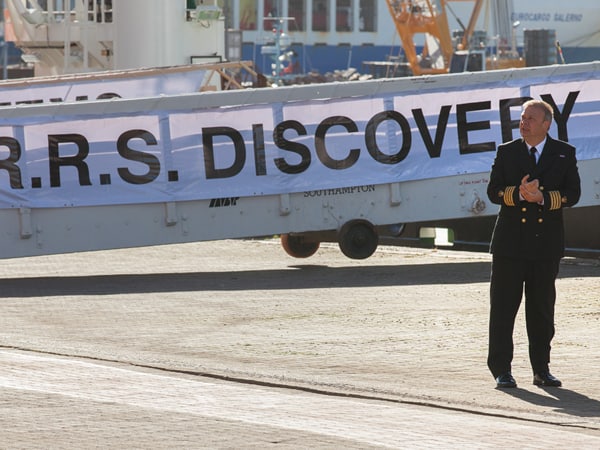 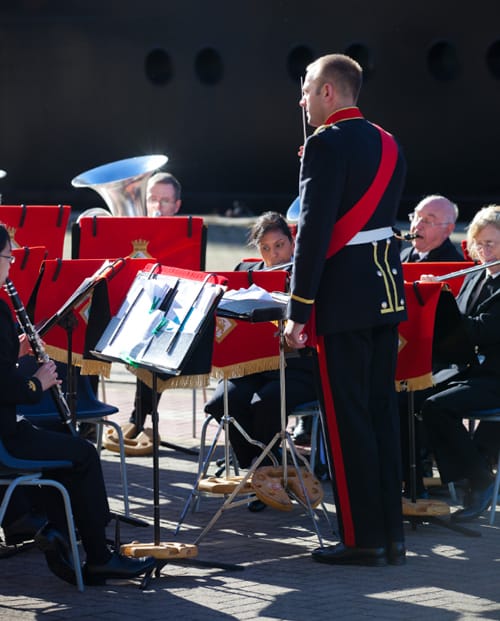 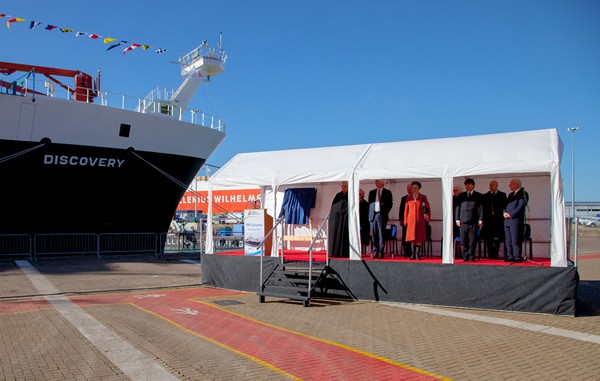 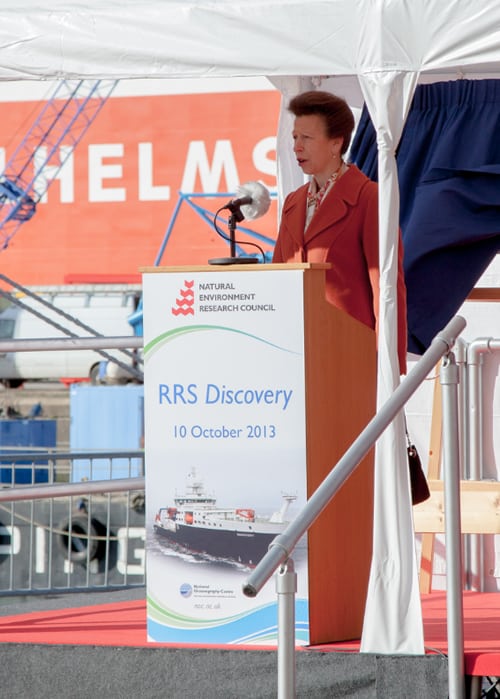 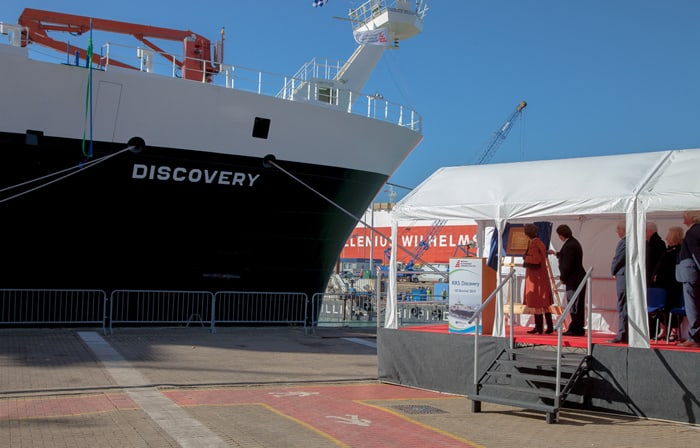 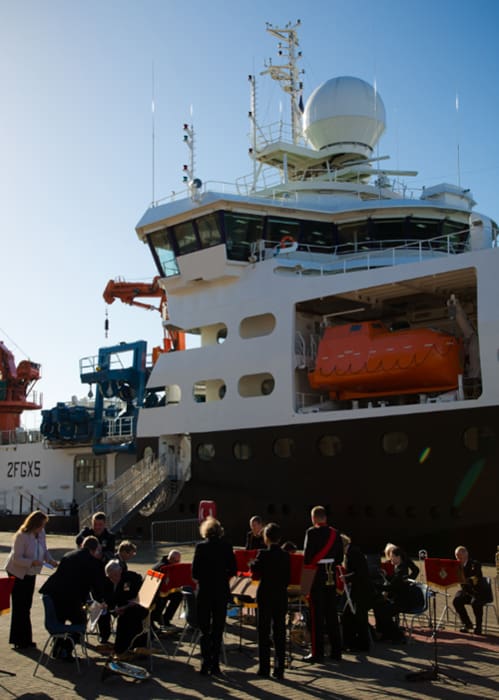 Photographs of Science Minister at the RRS Discovery naming ceremony 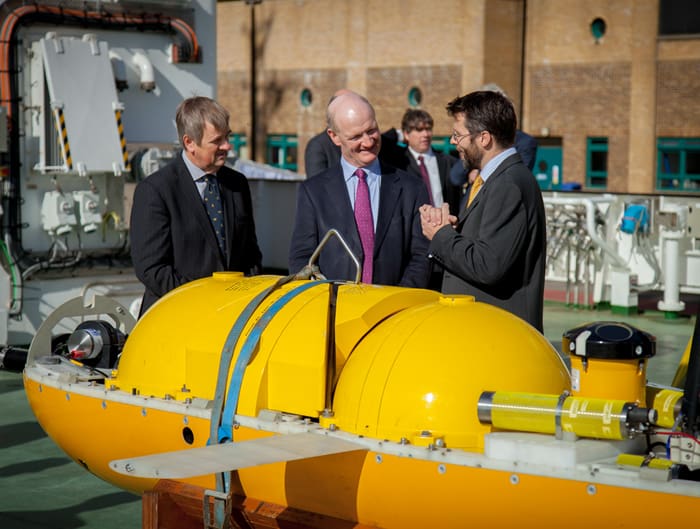 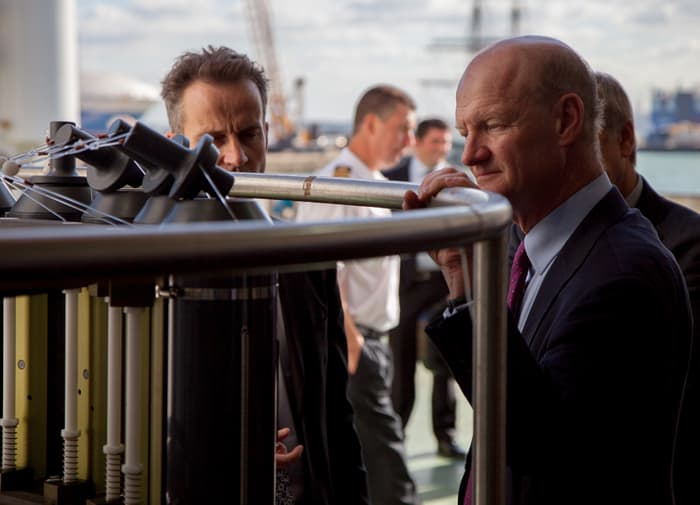 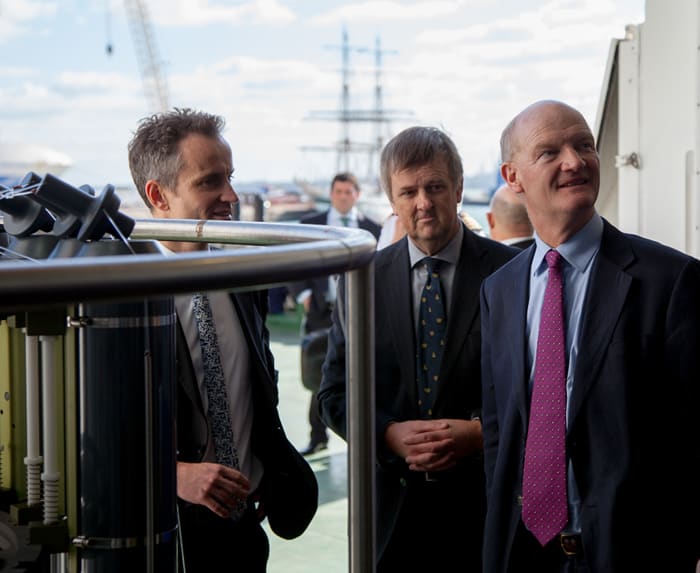 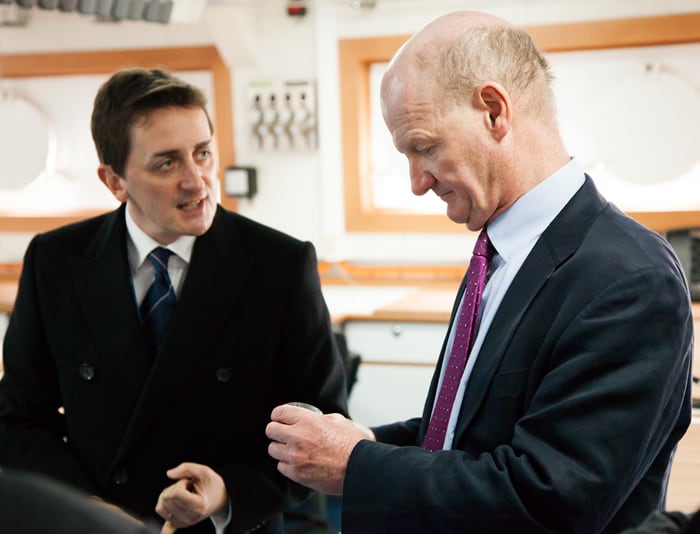 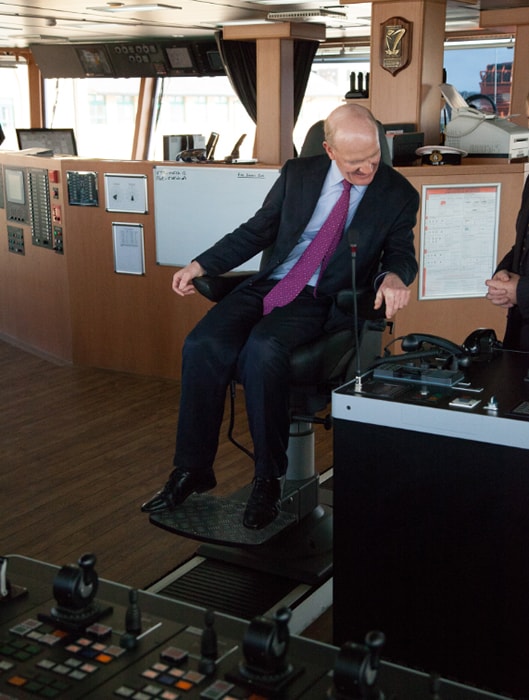 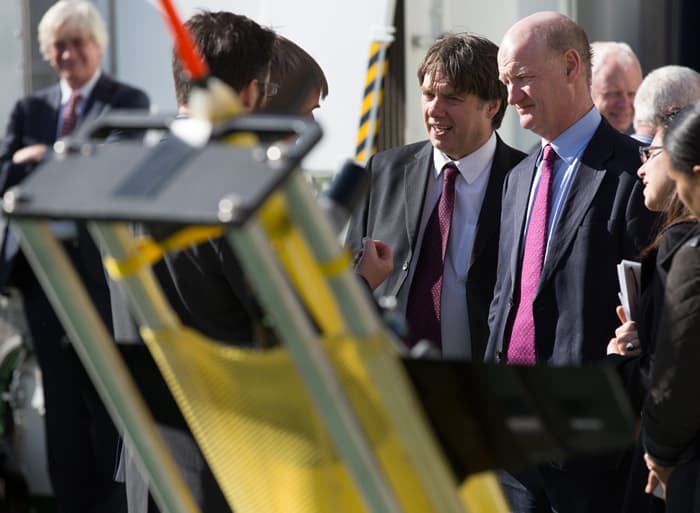 Video of HRH The Princess Royal naming the RRS Discovery

Following the ceremony, Her Royal Highness toured the ship, meeting officers and crew, representatives of the Freire shipbuilders and members of the Discovery replacement team who were praised by the Minister for delivering the project on time and on budget. The Princess was shown some of the equipment used by scientists to carry out research in the deep ocean. She also met researchers inside the centre where she learned about science impacts funded by the Natural Environment Research Council (NERC), or delivered by its centres.

Mr Willetts also toured the vessel and in a speech spoke of the UK’s world-leading role in marine science.

RRS Discovery is a state-of-the-art platform for world-leading oceanographic research and represents a £75 million investment in frontier science by the Department for Business Innovation & Skills. Commissioned by NERC and operated on NERC’s behalf by the National Oceanography Centre (NOC) for the United Kingdom’s marine science community, Discovery’s wide capability will allow deep-ocean research in the remotest and least hospitable parts of our planet, from tropical seas to polar waters.

Discovery joins RRS James Cook as one of a brace of vessels with deep ocean capability that will deliver NERC’s science priorities for decades to come. Her Royal Highness also named James Cook in 2007. 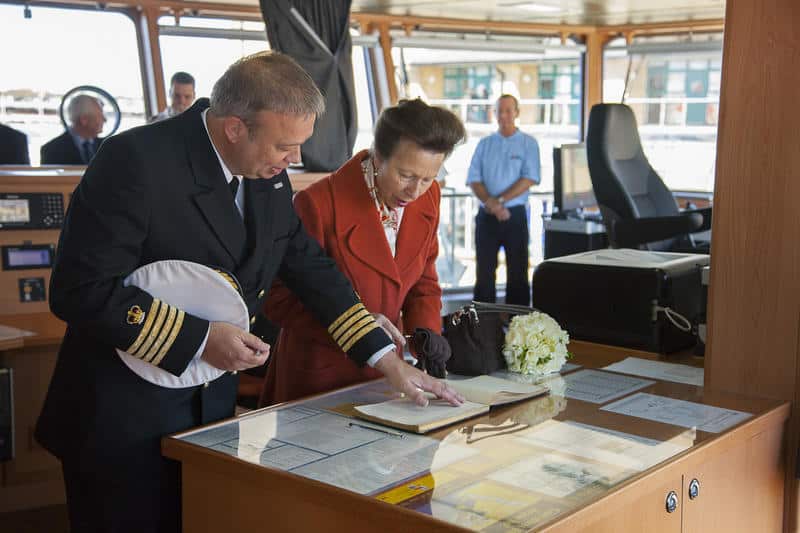 At almost 100 metres in length, and with a displacement of 6,075 tonnes, Discovery will carry a marine crew of 24 and has accommodation for 28 scientists and technicians.The ship is fitted with a comprehensive suite of laboratories, handling systems and sensors that will enable her to carry out research spanning a wide range of ocean issues that impact on society.

RRS Discovery will play a key role in the scientific mission to understand the role of the oceans in the Earth system and to carry out research that will deliver significant economic and societal benefits – particularly in areas including climate change, ocean acidification, the impact of human activity on delicate ecosystems, mapping earthquakes and underwater landslides and investigating fascinating features such as hydrothermal vents. Scientists will be able to sample and measure the properties of the atmosphere above the ocean surface, the water column itself and the seabed of the deep ocean.

The vessel will also be used to deploy submersible equipment, such as the Isis remotely operated vehicle, or NOC’s fleet of Autosub autonomous underwater vehicles, all of which are part of the MARS (Marine Autonomous & Robotics Systems) facility – one of Eight Great Technologies identified as crucial to the UK’s future prosperity.

Discovery is the latest in an illustrious line of vessels bearing the name that date back to 1602 when the East India Company commissioned the first recorded Discovery to explore the waters now known as the Hudson Strait in the long search for the North-West Passage. In the 20th Century a new Discovery was specially commissioned for the British National Antarctic Expedition of 1901–04, that included Antarctic heroes Captain Scott and Ernest Shackleton.

The new ship’s immediate predecessor ended a 50-year career in 2012, and was the platform for some of the most important marine science carried out during that period – truly a half-century of discovery.