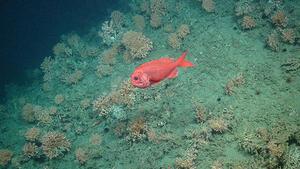 The first true three-dimensional picture of submarine canyon habitats has been produced using a unique combination of marine robotics and ship-based measurements.

The information captured in this new set of maps ranges in scale from the 200km canyon down to the size of an individual cold-water coral polyp, and will be used to inform the management of the only English Marine Conservation Zone in deep water.

This ‘nested map’ is the result of a recent scientific expedition to the Whittard Canyon in the Bay of Biscay, led by the National Oceanography Centre (NOC). It works in a way not unlike a set of Russian dolls, with the most detailed map sitting within a larger scale one, which sits within a larger map still.

Submarine canyons are some of the most complex deep-sea environments on this planet, and are known to be potential biodiversity hotspots. Similar to canyons on land, submarine canyons can have steep flanks, with vertical cliffs and overhanging rock formations. Until recently these parts were out of reach for traditional types of marine equipment, which made them the ‘forgotten habitats’ of the deep sea. By using unique robot technology to collect data in these ‘hard-to-reach’ areas, the results of this expedition will lead to a better understanding of the biodiversity patterns in the canyon and of the processes that drive them.

Echo-sounders on the RRS James Cook were used to create a 200km map of the canyon with a 50m pixel resolution. Using a newly-developed sideways-directed echo-sounder, the Autosub6000 robot-sub, maintained by the NOC, was able to map vertical walls within the canyon with a resolution of 3-5m per pixel. At the same time Isis, the NOC-maintained Remotely Operated Vehicle, was lowered from the RRS James Cook on a tether to record high definition video and to collect biological and geological samples from vertical and overhanging locations. Echo-sound data collected with Isis was also used to create the most detailed map of the three, with a resolution of 10-20cm.

Dr Veerle Huvenne from the NOC, who led the 5-week expedition, said: “Our robot vehicles imaged rich communities of cold-water corals, clams, deep-sea oysters and their associated fauna, including a broad range of fish species. We also captured amazing footage of Blue Sharks and Swordfish when the Isis marine robot was travelling to and from the seabed. 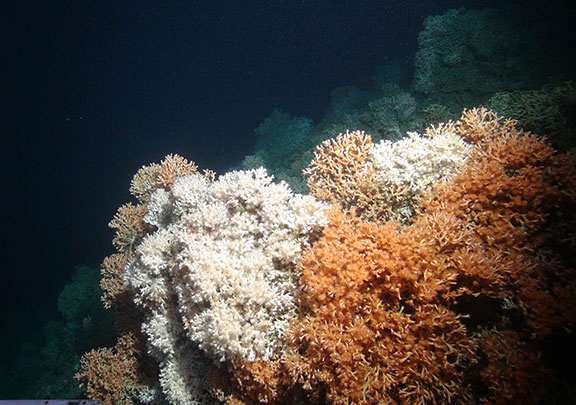 “The morphology of this canyon is spectacular. We have mapped cliffs up to 150m high and 1.6km long, in some locations down to centimetre-scale resolution. This makes us the only group in the world who currently can image vertical cliffs in the deep sea in this way.”

The Whittard Canyon proved to be a highly dynamic environment, with strong internal tidal flows and containing deep plumes of organic-rich sediment. To study these oceanographic processes, the University of East Anglia’s robot glider was used to continuously measure the water column. Tahmeena Aslam, who was responsible for the glider from UEA, said: “Our Seaglider collected a fantastic dataset and revealed the presence of internal waves up to 80 m high; these processes are likely to have a major influence on the distribution of habitats and fauna within the canyon”.

The expedition was part of the CODEMAP project, funded by the European Research Council, and received additional support from the NERC MAREMAP programme and DEFRA. Participants included researchers from NOC, University of East Anglia, University of Southampton, CEFAS, the British Geological Survey, IFREMER, National University of Ireland, Galway, and University of Aveiro.