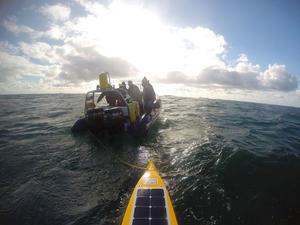 The second phase of an ambitious project to gather valuable information on ocean processes and marine life using a fleet of innovative marine robots has just reached its conclusion.

Co-ordinated by the National Oceanography Centre (NOC), the Exploring Ocean Fronts project took place off southwest England and saw the largest deployment of robotic vehicles ever attempted in UK waters.

The marine robots, which are powered by a combination of wave, wind and solar power, are controlled by satellite communications and can cover hundreds of kilometres in a single mission.

In the latest phase of the project, three unmanned surface vehicles were used to track fish carrying acoustic ‘pingers’ off the Devon coast. About 85 fish, including rays, sole and plaice, were tagged and released by scientists from the Marine Biological Association (MBA), with the aim of understanding how these fish use Marine Protected Areas. The roaming robotic vehicles carried acoustic receivers and worked alongside a series of fixed receivers on the seabed in order to track fish movements inside and outside of the protected sites. 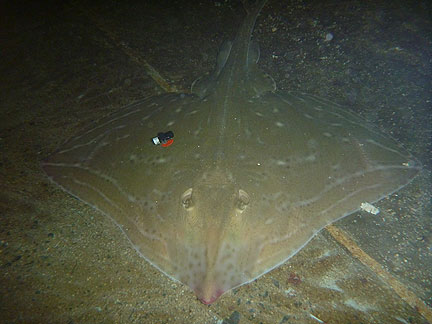 Commenting on the fish-tracking trial, Professor David Sims of the MBA said: “The patrolling robots successfully located tagged fish, and also tracked the movements of individual fish over several days by re-locating them. This demonstrates the potential of ocean robots for monitoring dynamic changes in distributions of commercially important fish, which will underpin effective management and understanding of climate change impacts”.

The surface vehicles were also carrying camera systems that successfully imaged a variety of marine wildlife, including porpoises and gannets. It is the first time images of marine life have been captured by NOC’s robotic vehicles operating far from land and demonstrates huge potential for surveying parts of the ocean that are rarely visited by research ships.

Phase one of the project saw the robot fleet head up to 150 kilometres offshore from the Isles of Scilly over a two-week period. Despite having to cope with a series of autumn storms, the fleet continued to collect high-quality data that have provided valuable insights into the effect that stormy weather has on ocean processes and marine life. Head of NOC’s Marine Autonomous Robotics Systems group, Dr Maaten Furlong said: “These missions have demonstrated the ability of these new vehicles to travel hundreds of kilometres in very demanding conditions. Although some of the vehicles were impacted by the bad weather, it provided us with the opportunity to gain experience of piloting in harsh conditions”. 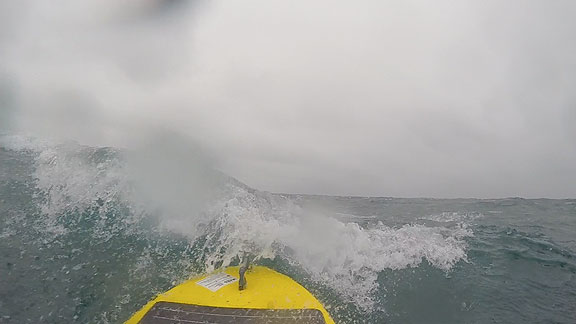 The pioneering trials were co-ordinated by the National Oceanography Centre, in partnership with 20 other organisations representing the marine robotics industry, research organisations, and marine data users such as the UK Met Office and the Royal Navy. Dr Russell Wynn of NOC, who was the scientific co-ordinator of the project, said “Overall the project has been hugely successful and we have collected a huge amount of valuable scientific and engineering data. By working in partnership and sharing our resources and expertise we have developed a strong UK community in marine robotic operations, and we are already planning further joint missions in the near future”.