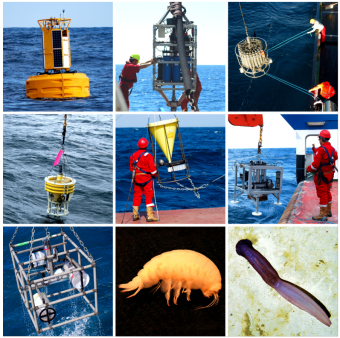 The PAP-SO special issue, which follows two previous decade special issues, features data from the last ten years, contributing to an exceptional 36 years of oceanographic science conducted at the site to date. The issue highlights the unique strengths of this NOC observatory – monitoring the environment from the atmosphere to the abyssal seafloor over three miles below. Since its beginning in 1985, the observatory has been an international collaboration, that continues to serve the global need for open ocean observations – a key pillar of United Nations Decade of Ocean Science for Sustainable Development (2021–2030).

The PAP-SO, located in the North Atlantic Ocean, provides high-quality and high-resolution data, which helps to increase our knowledge of how our oceans function. These long-term time series observations are particularly critical to our ability to detect change in ocean ecosystems, including the impact of a changing climate. The new special issue provides 15 articles on the full range of our science, from the surface ocean to the deep-sea floor. How weather and climate influence the oceans uptake of carbon dioxide, its conversion to ‘food’ to fuel ocean life, its transfer to great depths, and how its variation with the seasons and across the decades likely causes change to the ocean’s biodiversity.

The NOC’s Dr Susan Hartman, lead editor for the special issue said, “It is extraordinary to think just how many people, across the generations, and from across many nations have contributed to the science achieved at the PAP-SO so far. From school children joining our outreach sessions, to the most senior international visiting scientists, so many ships’ crews, an army of technicians and engineers, and the wealth of support we receive ashore. Knowing just how rare and precious these data are, keeps us all enthusiastic for more”.