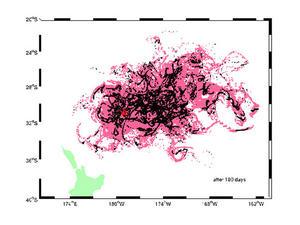 A technique presented in Nature Communications by researchers from the National Oceanography Centre (NOC) and the University of Southampton will aid in predicting the dispersal and drift patterns of large floating ‘islands’ of pumice created by volcanic eruptions at sea.

Known as pumice rafts, these large mobile accumulations of pumice fragments can spread to affect a considerable area of the ocean, damaging vessels and disrupting shipping routes for months or even years. The ability to predict where these rafts will end up could give enough advance warning for protective measures to be put in place on shipping routes or in harbours where the presence of pumice is hazardous.

Martin Jutzeler, Post-Doctoral Research Fellow at NOC, and a team of colleagues simulated the drift of a massive 400km2 raft of pumice from Havre, a deep submarine volcano in the southwest Pacific, using a high-resolution model of the global ocean circulation. The team, which included researchers from the University of Tasmania in Australia, the University of Otago in New Zealand and Stanford University in the United States, then tested the results against satellite imagery plus direct observations from sailing crews, to show that they can accurately reproduce surface drift using this method and note that this large-scale natural experiment validates the physics of the model.

This technique, they believe, can be used to forecast dispersal routes of potentially hazardous pumice rafts from future eruptions, mitigating potential risks to ships and allowing authorities to protect harbours. The same high-fidelity particle tracking can also be used to predict the spread of other floating objects in surface ocean waters, such as anthropogenic waste or passively-drifting organisms.

“Pumice in rafts can drift for years, become waterlogged and sink, or become stranded on shorelines. For a variety of reasons, it’s important that we develop a better understanding of their formation, movement and dispersal over time,” said Dr Bob Marsh, Reader in Physical Oceanography at the University of Southampton who was part of the research team. “The pumice raft used in our research was formed by the impressive, deep submarine eruption of the Havre caldera volcano in the southwest Pacific in July 2012 was perfect for our research. The eruption was far from coastal interferences so produced a single raft spanning over 400 square kilometres in one day, thus initiating a gigantic, high-precision, natural experiment in surface dispersion, in a region dominated by eddies – the oceanic equivalent of weather systems.”

The paper ‘On the fate of pumice rafts formed during the 2012 Havre submarine eruption’ is published online by Nature Communications.