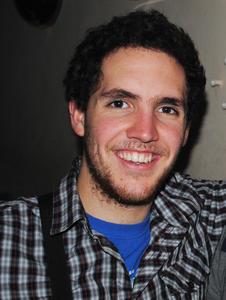 Three PhD students of the University of Southampton’s School of Ocean and Earth Science (SOES) based at the National Oceanography Centre in Southampton have won awards for presentations given at scientific conferences.

In January, second year PhD student Casey Nixon attended the Tectonic Studies Group Annual Meeting in Durham where he won the Mike Coward Prize awarded for the best oral presentation by a postgraduate student. He also won the Shell Prize for Best Postgraduate Presentation, awarded to the student who delivers the best overall presentation (poster or talk). To win both awards was a “nice surprise”, said Casey, who is supervised by Professor Jon Bull and Professor Dave Sanderson (SOES /Geology and Geophysics).

This was based on a week’s fieldwork spent in Turkey alongside a group of fourth year masters students, in conjunction with the company Stratex (www.stratexinternational.com) who have close ties with the University and kindly provided support in the way of food, expertise and accommodation. This formed a side project James’ main PhD on similar but better known and commercially exploited deposits in Zambia in central Africa.

“The deposits in Turkey are much more modern than those in Zambia, and were very useful to investigate as a comparator, as they show far less of a metamorphic overprint,” said James. “Our research group represented Southampton very strongly,” he added.

The same conference was also attended by third year SOES PhD student Steve Hollis who also won a prize as runner up for Best Student Oral Presentation. His talk focused on mineral exploration (zinc, copper, lead and gold) within the Tyrone Complex of Northern Ireland (northeast of Omagh) and how these rocks correlate with a succession in Newfoundland, Canada, which hosts a world-class metal mining district.

“The conference was excellent and a great opportunity to interact with people from the mining industry,” said Steve.

Both James and Steve are supervised by Dr Steve Roberts (SOES/geochemistry).