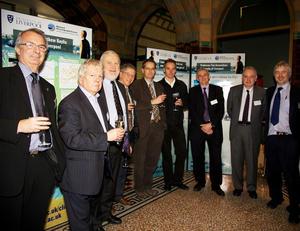 In our lifetimes, atmospheric concentrations of carbon dioxide have risen, leading to a measured warming around the globe.

The Science of Climate Change Briefing covered a diverse range of topics, including rising sea levels, increased carbon dioxide emissions and the spread of disease from animals to humans. The event attracted an audience made up of representatives of the scientific community, alumni and members of the public. Subsequent feedback has been extremely positive.

Chair of the Science and Technology Select Committee, Andrew Miller MP, discussed the outcomes and lessons learned from the investigation into the UEA’s so-called ‘Climategate’.

Professor Philip Woodworth< of NOC talked about understanding sea-level rise and variability. Professor Tim Greenshaw (University of Liverpool) talked about the UK’s energy requirements and how these can be met through alternative sources, and Professor Matthew Baylis, from UoL’s, Institute of Infection and Global Health shared his findings about the influence of climate change on the transfer of disease and how this was starting to impact on the UK.

Professor Sir David King, who is also the University of Liverpool’s Chancellor, discussed the key strengths of the UK’s science base in helping solve problems around energy efficiency, the spread of infectious diseases, and flooding.

Lawrence McGinty is a University of Liverpool graduate in zoology and reports on science and environmental issues for ITV news programmes. Lawrence and his team were awarded an Emmy for Best International News Coverage of the Mozambique floods in 2000. His entertaining talk addressed the way the media report climate change and how this has changed over the last five years.

Professor Ric Williams, Chair in Ocean Sciences at the University of Liverpool’s School of Environmental Sciences, said “There is widespread public concern and confusion about climate change. In our lifetimes, atmospheric concentrations of carbon dioxide have risen, leading to a measured warming around the globe. Despite this warming effect, there are extensive regions of the Earth which are becoming much cooler or warmer linked to natural variability over the period of a decade, similar to changes in our weekly weather.”