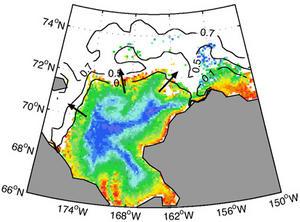 Our aim was to use satellite data to get a synoptic view of ice-edge blooms across the whole Arctic region.

Ongoing climate-driven changes to the Arctic sea-ice could have a significant impact on the blooming of tiny planktonic plants (phytoplankton) with important implications for the Arctic ecosystem, according to new research conducted by scientists at the UK’s National Oceanography Centre (NOC).

“Ice-edge phytoplankton blooms in the Arctic Ocean provide food for planktonic animals called zooplankton, which are in turn exploited by animals higher up the food chain such as fish,” explained Dr Andrew Yool, one of the team of NOC researchers.

During the Arctic spring and summer, sea-ice melts and breaks up. Freshwater from melting ice forms a blanket over the denser, saltier water below. This stratification of the water column, along with seasonal sunshine, triggers the appearance of phytoplankton blooms, which often form long but narrow (20–100 km) bands along the receding ice-edge.

Arctic ice-edge blooms have in the past been studied largely during research cruises. These studies have often focused on regions such as the Barents Sea between Norway and the Svalbard Archipelago, and the Bering Shelf bordering Alaska, where blooms are thought to account for 50% or more of biological production.

However, advances in modern satellite technology now offer the opportunity to observe and monitor ice-edge blooms at high spatial resolution over large areas and extended periods of time from space.

“Our aim was to use satellite data to get a synoptic view of ice-edge blooms across the whole Arctic region,” said Dr Yool.

To do this, the research team used daily data from the NASA’s SeaWiFs satellite, which was launched in 1997. SeaWiFs continuously observes ocean colour (sea-ice, cloud and fog cover permitting), sampling the whole globe every two days. To provide an alternative estimate of bloom occurrence, and an independent check on their findings, the researchers also used data from the MODIS satellite.

Ice-edge blooms are identified from the spectral signature of the photosynthetic pigment chlorophyll, after correction for contamination by other coloured organic matter in surface waters.

So as better to understand the relationship between phytoplankton blooms and seasonal changes in sea ice, the researchers also used information on sea ice concentrations obtained from the US National Snow and Ice Data Center (NSIDC). Their study covered the period 1998–2007.

They found that ice-edge blooms occurred in all seasonally ice-covered areas and from spring to late summer. They observed ice-edge blooms in 77–89% of locations for which they had adequate data. The blooms usually peaked within 20 days of ice retreat, sometimes forming long belts along the ice edge (greater than 100 km).

“The bloom peak is most often located close to the ice edge,” said Dr Yool, “We observed blooms propagating in a wave-like fashion behind the receding ice edge over hundreds of kilometres and over several months, while others remained stationary.”

Because of the geography of the Arctic Ocean, sea ice does not always retreat northwards. For example, in Baffin Bay and Davis Strait, west of Greenland, ice shrunk both westward and south-eastward from the north in spring and summer, with phytoplankton blooms propagating along the ice edge as it receded.

“Our findings demonstrate strong biophysical linkage between bloom propagation and sea-ice melt back, which is independent of the actual direction of retreat,” said Dr Yool.

These findings are important because they indicate that future change in Arctic sea- ice resulting from climate change could significantly impact the occurrence of phytoplankton blooms as well as the animals further up the food chain that ultimately depend upon them, including fish.

What effects future shrinkage in sea-ice will have on the ecology and biogeochemistry of the Arctic Ocean are still largely unclear, as Dr Yool explained “It is quite possible that ongoing climate change will lead to ice-free summers in the Arctic within the next few decades. As the melt season becomes longer, ice-edge blooms may propagate over larger distances, stripping out surface nutrients as they go. However, whether the Arctic becomes more or less productive will ultimately depend on complex factors affecting ocean stratification and mixing, and thus the availability of nutrients in sunlit surface waters.”

Dr Yool and his colleagues hope that their findings will contribute to a better conceptual understanding of the ecology of the Arctic Ocean, which should help computer modellers forecast future changes under global warming.

The researchers are Mahé Perrette, Andrew Yool, Graham Quartly and Ekaterina Popova of the National Oceanography Centre. The research work began as part of Mahé Perrette’s Masters degree undertaken within the University of Southampton’s School of Ocean and Earth Sciences.