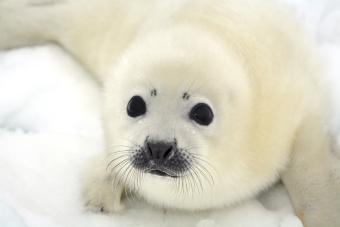 A new project will investigate how climate-driven changes affect two top Arctic predators, the Harp and Ringed seals, as well as the base of the Arctic food web.

As part of this project scientists from the National Oceanography Centre (NOC) will work alongside five other UK centres and 21 international partners to help improve understanding of the Arctic, which has been traditionally under sampled.

Dr Jo Hopkins, from the NOC, said “This is an exciting and ambitious project that will help scientists predict any future changes to the Arctic food web. Gathering the data for this will take us sailing out this summer to the Barents Sea, around Svalbard, on the RRS James Clark Ross research ship to collect samples of water, zooplankton and sediments.”

The marine ecosystem in the Arctic is complex and highly adapted to sea-ice. In fact, the productivity of algae living on the underside of sea-ice is an important food source for the base of the food web. At higher trophic levels, sea-ice also provides a platform for Arctic seals to moult and reproduce. Consequently, understanding the immediate and long term consequences of rapid environmental change on the Arctic marine ecosystem is of key importance if we are to successfully engage with and advise policy makers responsible for managing ecosystem services and seal populations.

The three and a half year ARISE (ARctic Isotopes and SEals) project, led by the University of Liverpool, will investigate how climate change has altered food web structure on decadal timescales, in part to set a baseline against which future changes and management priorities can be assessed. ARISE will achieve this by combining novel stable isotope biomarker techniques, the latest seal population and ecosystem models, remote sensing data sets, satellite tags to track seals, and analysis of archive seal teeth and tissues. Dr Jo Hopkins and Dr Andrew Yool from the NOC will be providing expertise in shelf sea physics, fieldwork planning and leadership, and modelling capability.

NOC scientist, Dr Andrew Yool, said “ARISE’s investigation of Arctic productivity and ecosystems will provide valuable data with which we can validate and improve the performance of our models in a region that’s traditionally poorly sampled and understood.”

ARISE is funded by the Natural and Environmental Research Council (NERC) and will run for 3.5 years, starting in February 2017.