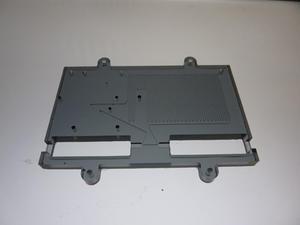 The first step in developing a cost-effective micro sensor for long-term monitoring of ocean acidification has been achieved by a team of scientists and engineers.

The new technology, that will measure pH levels in seawater, was developed by engineers from the National Oceanography Centre, in close collaboration with oceanographers from University of Southampton Ocean and Earth Science, which is based at the centre.

The team successfully tested the new device aboard the old RRS Discovery, and presented their results recently in the scientific journal Anaytica Chimica Acta. In its current form it can be used for on-board analysis of seawater samples, but the ultimate aim is to further develop the design so that it can be deployed for long periods of time in the ocean, taking in situ measurements.

Ocean acidification is occurring as a consequence of rising levels of atmospheric carbon dioxide (CO2), which is absorbed by the oceans. When it dissolves in seawater, CO2 forms a mild acid, which is decreasing ocean pH globally and could impact marine ecosystems. “We need to monitor seawater pH to a high level of precision and accuracy, and over long periods of time, in order to detect changes in the carbon system,” says Dr Victoire Rérolle, lead author and researcher with NOC’s Sensors group.

As well as monitoring global change, the sensors can be used to measure more localised human impact. The micro sensors could be deployed to detect leakages from carbon capture and storage sites – whereby CO2 is artificially removed from the atmosphere and stored in subsea reservoirs – by measuring any proximal fluctuations in pH. The oil industry is also interested in this technology for monitoring seawater acidity around drilling sites.

The sensor works on the same principles as litmus paper that many people may have used in chemistry lessons at school, whereby the colour changes depending on the acidity of the solution.

“The microfluidic chip within the sensor has great advantages because it is robust, small, reasonably cheap to produce, and uses small amounts of reagents – which is really key for in situ deployment where it may be collecting data out at sea for long periods of time.

“The sensor uses a dye which changes colour with pH. The dye is added to the sample, then the colour is measured using an LED light source and a device called a ‘spectrometer’. The microfluidic element simply describes the component needed to mix the seawater sample with the dye and the cell to measure the colour.”

The next stage is to develop an in situ system that can be deployed on ocean observing platforms, as has been done with other sensors measuring different chemical properties of seawater. “Now that we know that the bench top system works, we can use the technology from other systems to create in situ pH micro sensors,” says Dr Rérolle. “This is what we are working on now, in collaboration with oceanographers based at NOC.

“By working with both engineers and scientists, you benefit from the insights of the developers and the end-user, resulting in a fit-for-purpose end product built to high specification.”

The development work was funded by SENSEnet, an EU Framework 7 project for the development of aquatic sensors, and the research expedition aboard the old RRS Discovery – which was in service until 2012 – was funded by the UK Ocean Acidification Research Programme.

Collaborating institutes were the National Oceanography Centre, University of Southampton Ocean and Earth Science, the Norwegian Institute for Water Research, the Uni Bjerknes Centre Norway and the University of Bergen.