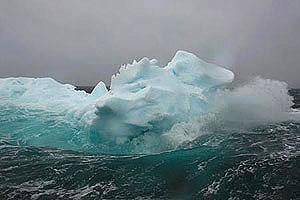 A new study has revealed a rapid response between global temperature and ice volume/sea-level, which could lead to sea-levels rising by over one metre.

During the last few million years, global ice-volume variability has been one of the main feedback mechanisms in climate change, because of the strong reflective properties of large ice sheets. Ice volume changes in ancient times can be reconstructed from sea-level records. However, detailed assessment of the role of ice volume in climate change is hindered by inadequacies in sea-level records and/or their timescales.

Now, for the first time, scientists are able to accurately date continuous sea-level records, to allow detailed comparisons of the ice-volume variability with independently dated ice-core records from Antarctica and Greenland.

Previous studies of the timing of past ice-volume changes relied on the ‘Red Sea relative sea-level (RSL) record’ for reconstruction of highly resolved and continuous records of sea-level variability over the past 500,000 years. The drawback of the RSL method, however, is that it did not have independent age control. This inhibited detailed comparison with other well-dated climate parameters, such as temperature or CO2 records from ice cores.

An international team of scientists, led by Eelco Rohling, Professor of Ocean and Climate Change at the University of Southampton, has developed a new method of dating the RSL record by using Mediterranean data from radiometric (Uranium-series) dating of cave deposits. This provided a much improved timescale for the RSL record. The team was able to apply the new dating method throughout the entire last glacial cycle (150,000 years), which resulted in an unprecedented continuous sea-level record with excellent independent age control.

The study also found that periods of extensive ice-volume reduction/sea-level rise were always characterised by very fast changes, of the order of one or even two metres per century sea-level rise.

Professor Rohling, who is currently based at the National Oceanography Centre Southampton but will join the Australian National University next year, says “This is the first time that these rates could be measured for any other period than the end-of-ice age ‘terminations/deglaciations’. Although it is always hard to step from palaeo reconstructions to future projections, it suggests that when significant ice-volume adjustments happen, they are rarely slow.

“Ice sheet responses to a change in climate forcing are like the responses of heavy freight trains to firing up the locomotive. They are hard to set in motion (slow to ‘spin up’), but once they are reacting, they will be equally slow to ‘spin down’. So a lag of a few centuries is worrisome, because we have been warming up the climate for 150-160 years now. If the natural relationship (when changes in climate were slower than today) also holds for the very fast changes in climate today, then we are coming into that ‘window’ of time where we may expect to start seeing some unprecedented responses in the large ice sheets. This then may tie in with observations of the past decade or so of large ice-shelf collapses around Antarctica and Greenland, the major melt-area expansion over Greenland, changes in the flow speed of major ice streams (both Antarctica and Greenland), and increasing ice-mass loss over West Antarctica/the Antarctic Peninsula and Greenland.

“We cannot say whether this proves the case, but at least the time delay of the modern ice-sheet responses relative to climate change would seem to agree with the response timescales we have now found in the palaeo-record.”

Co-author Christopher Bronk Ramsey, from Oxford University, who helped with radiocarbon dating on the project and developed some of the age-modelling techniques used, adds “What is new here is that our dating of the marine sediment is much more direct. This gives us far more accurate age profiles for the sedimentary sequences, which in turn provides valuable insight into the way the earth system has worked in the past.”

The study, which is published in the latest issue of Nature, also hints that temperatures over Greenland changed virtually simultaneously with ice volume, whereas temperatures over Antarctica were leading ice-volume change by up to 700 years. Professor Rohling explains why this may be the case, “Ice volume is related to ice area, and ice is very reflective. So a large ice volume/area reflects a lot of incoming solar radiation. When the ice volume/area reduces, less incoming radiation is reflected, which leads to regional warming. Atmospheric temperature has little inertia, so it will respond very quickly to ice-volume changes.