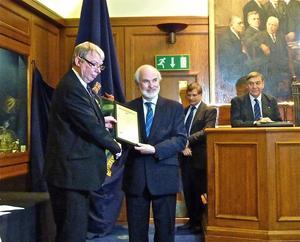 The National Oceanography Centre (NOC) and its partners featured strongly in the Society for Underwater Technology’s 2010 awards, which were recently presented at the SUT Annual General Meeting onboard the Guild of Master Mariners Headquarters Ship Wellington.

Dr Nic Flemming OBE, who served many years at the Institute of Oceanographic Sciences Deacon Laboratory, Wormley, and the University of Southampton, and who is still very scientifically active despite ‘retiring’ some time ago, was awarded the prestigious Houlder Cup in “recognition of his distinguished association with scientific and archaeological diving and, in particular, his long-term interest in, and promotion of, safe and proficient diving practices.”

More applause followed when Professor Gwyn Griffiths, NOC Head of Ocean Technology and Engineering, was announced as the recipient of the SUT President’s Award, in recognition of “his distinguished work in the field of underwater technology and in particular for his outstanding support to the Society.”

The citation stated that “Gwyn is perhaps best known for his major involvement with Autosub, the programme that defined the UK’s activity in the field of underwater autonomous vehicle development for more than a decade. A prolific author of high-quality scientific papers in his field and presenter at international conferences, he is rightly recognised for his achievements in all corners of the world.”

Professor John Huthnance MBE of the NOC, though unable to attend, was awarded the SUT’s Oceanography Award “for his major contribution to the field of Oceanography.”

Gary Momber of the Hampshire and Wight Trust for Maritime Archaeology, based at NOC, was awarded a Fellowship of the Society for his services to marine archaeology and scientific diving, and Stephen Hall from the National Marine Co-ordination Office, also based at the NOC, was declared the Honorary Secretary of the SUT, succeeding Moya Crawford of Fife-based salvage firm Deep Tek Ltd.

Tags:
people
About Us