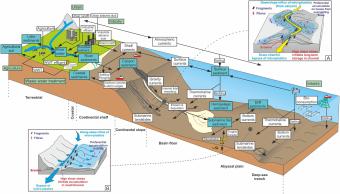 Research published earlier in the week reveals that microplastics often accumulate on the deep sea floor in the same place as diverse and dense marine life communities. This is because the same submarine sediment flows that transfer the oxygen and nutrients needed to sustain life, also transport microplastics from urban rivers to the deep-sea floor via pathways such as submarine canyons.

National Oceanography Centre (NOC) scientist, Dr Mike Clare, who is an author on this paper, said “It may come as a surprise, but only a small amount (about 1%) of the plastic in the ocean floats on the surface. Most of the rest sinks. Ocean currents and other near-seafloor flows appear to control where the sinking plastic ends up. It’s essential that we develop a basic understanding of the processes that control the distribution of microplastics, so that we can better understand where and how these tiny fragments and fibres enter the food chain through seafloor marine life.”

These findings result from combining previously published observations of seafloor microplastic distribution with new measurements and models of deep-sea transport of sediment and organic material.

The paper’s lead author, Dr Ian Kane from the University of Manchester, said “Microplastics have been found in nearly all environments on our planet, yet we only have a very limited idea of how they are transported; particularly in the deep sea. There is now a pressing need to get more data to link hotspots of marine pollution with transport processes, and determine the ultimate fate of microplastics in the deep sea”.

This research between the NOC and University of Manchester, forms part of a broader collaboration with IFREMER in France, University of Bremen in Germany, and Utrecht University in the Netherlands, called SCAMPI (Seafloor Currents And Microplastics Investigation), which aims to investigate the role of seafloor currents in controlling the distribution of microplastics in the ocean. Mike Clare was funded by the NERC National Capability CLASS (Climate Linked Atlantic Sector Science) programme.

The paper is published in Frontiers in Earth Science and can be downloaded free here.