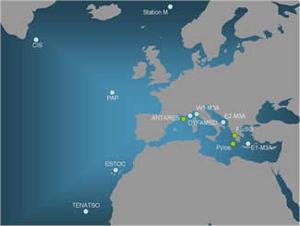 In May 2010, the National Oceanography Centre (NOC) joins forces with the UK Met Office to enhance ocean monitoring at the Porcupine Abyssal Plain sustained observatory (PAP-SO), the longest multidisciplinary open-ocean time-series observatory in Europe. This collaboration should both advance scientific understanding of the ocean and improve climate prediction.

The PAP-SO is located in the North Atlantic off the Irish continental margin, where the water depth exceeds 4000 metres. With over 20 years of time-series research, it has grown from an environmental study site established in 1989 to become an important focus for international, multidisciplinary scientific research and monitoring.

The PAP-SO is currently operated by the NOC. It is one of nine key ocean observatories across Europe in the EuroSITES network and is part of the OceanSITES international network of deep-water reference stations.

A memorandum of understanding between the NOC and the Met Office will affirm the vision for sustained observations at the PAP site beyond 2010.

“We are delighted with the collaboration with the UK Met Office because it marks the first collaboration between the NOC and Met Office at the PAP site since the relocation of the Met Office marine engineering team to the NOC in Southampton in 2008,” explains PAP-SO co-Principal Investigator Professor Richard Lampitt of the NOC.

Infrastructure already established at the PAP-SO since 2002 includes mooring lines and sensors. Ocean data are transmitted to shore within hours of collection and are sent as daily deliveries to global data assembly centres. 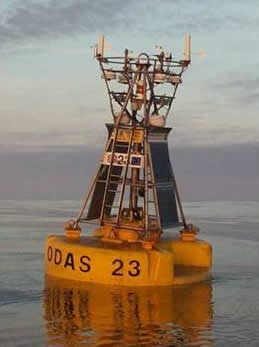 This year, the Met Office will supply an Ocean Data Acquisition System (ODAS) surface buoy with sensors to measure air pressure, air and sea temperature, humidity, wind speed and direction, wave height and period. This will enable the first simultaneous monitoring ofmeteorological and ocean variables at the site.

The buoy has been modified from the standard Met Office design to accommodate additional observing equipment to receive and transmit, in real time, subsurface observations, which will be used by operational ocean forecasting models run by the Met Office. They will also be used by NOC scientists to assess variability and long-term changes in the ocean properties.

“We have wanted to deploy a moored buoy at the PAP site to provide meteorological information to complement subsurface measurements made by the NOC to better meet the requirements for climate monitoring, and to benefit scientific interpretation of data from the PAP,” says Jon Turton of the Met Office: “This is just the start of the Met Office and NOC working more closely for mutual benefit.”

The collaboration forms part of ongoing developments to the PAP-SO infrastructure, funded principally by the UK’s Natural Environment research Council (NERC), with additional funding from the European Union

Enhancements during 2010 include adding oxygen and sunlight sensors to the existing suite of upper-ocean biogeochemical sensors. The scientists are also developing near real-time data transmission from the abyssal seafloor via acoustic telemetry from a lander and digital time-lapse camera system.

These developments along with the Met Office collaboration contribute further to establishing the PAP-SO as a key internationally renowned ocean observatory. The site is an integral part of the Global Ocean Observing System (GOOS) contributing to the Group on Earth Observations (GEO)

The May 2010 deployment will take place onboard the Royal Research Ship James Clark Ross during a research cruise from Vigo, Spain, to Immingham, UK (25 May–6 June).

The full deployment and science activities will be followed with a live blog through the EuroSITES outreach website: http://outreach.eurosites.info/cruises.