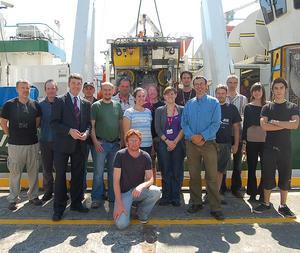 This expedition offers us the first opportunity to investigate mineral deposits and vent animals in this unexplored and important part of the Mid-Atlantic Ridge.

Undiscovered ‘alien’ life forms that thrive without sunlight in temperatures approaching boiling point may soon come to light thanks to a ground-breaking marine research mission aboard the Irish research vessel RV Celtic Explorer.

In collaboration with scientists from the UK’s National Oceanography Centre, the researchers sailed from Galway for the mid-Atlantic Ridge earlier this month and return on 4 August 2011. The voyage is being filmed for the National Geographic Channel for inclusion in an upcoming series about the ocean.

The mission carries geochemists, marine biologists, marine geologists, marine geneticists and technicians from Ireland and the UK as well as a three-person film crew from National Geographic. They will spend 25 days at sea and will be posting a regular blog on http://scientistsatsea.blogspot.com.

“This expedition offers us the first opportunity to investigate mineral deposits and vent animals in this unexplored and important part of the Mid-Atlantic Ridge,” said Dr Bramley Murton of the National Oceanography Centre, who first discovered the location of the vents on an expedition aboard the UK research vessel RRS James Cook in 2008, and who is now leading the mineralisation study on the expedition. “Nothing is known about the hydrothermal vents, their mineral deposits or the life they support on the Mid-Atlantic Ridge between the islands of the Azores to the south and Iceland to the north. Because this part of the ridge is trapped between these islands, vent animals may have evolved in isolation and be quite unique from elsewhere.”

The mission, led by Dr Andy Wheeler of University College, Cork (UCC), will be investigating life at 3,000 metres below the surface of the sea on the ‘45° North MAR hydrothermal vent field’ using the Remotely Operated Vehicle (ROV) Holland 1. These vents, which spew mineral rich seawater heated to boiling point by volcanic material in the earth’s crust below, are home to a rich variety of marine life that thrives in complete darkness on bacteria fed by chemicals.

Patrick Collins from NUI Galway’s Ryan Institute will lead Ireland’s marine biological team investigating this unique ecosystem, which could tell us not only about how life might have evolved on other planets, but may also be a rich source of new biochemical processes with valuable medical and industrial applications.

The University of Southampton’s Dr Jon Copley who is based at NOC, will catalogue and characterise the species found at the vents in collaboration with Patrick Collins who said, “We hope to find a whole community of previously unknown species, increasing our understanding of deep sea biogeography. There is potential here to put Ireland on the global map as a serious player in deep-sea science. This is all the more timely with the exploitation of deep sea and hydrothermal vents for precious metals and rare earth minerals now a reality.”

Another objective of the mission is to investigate the rich deposits of deep-water corals on the Porcupine Bank’s ‘Moira Mound’, which has already been designated as a Special Area of Conservation. These corals, which are very delicate and grow extremely slowly, are highly susceptible to damage by deep-water trawling and mineral dredging operations. Dr Andy Wheeler, Chief Scientist of the expedition, is a veteran of four previous ROV surveys to cold-water coral mounds.

This mission is supported by the Marine Institute under the 2011 Ship-Time Programme of the National Development Plan and includes funding from the National Geographic Society.