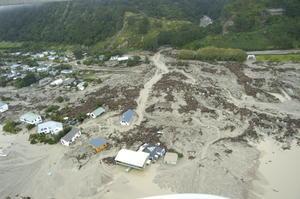 The use of LIDAR for debris flow hazard analysis is still in its early days.

Southampton scientists along with colleagues in New Zealand have used a sophisticated optical mapping technique to identify and accurately measure changes in coastal morphology following a catastrophic series of landslides.

“Our findings are important for assessing geological hazards and reducing the dangers to human settlements,” said geophysicist Professor Jon Bull of the University of Southampton’s School of Ocean and Earth Science based at the National Oceanography Centre, Southampton.

Matata is a small coastal town located on the Bay of Plenty at the northern end of New Zealand’s North Island close to a highly active volcanic zone. On 18 May 2005, the town was inundated by devastating debris flows. These flows resulted from torrential rain that triggered widespread landslips in the catchments of the Awatarariki and Waitepuru streams in the steeply rising hills behind the town.

Debris flows are liquefied landslides of water-saturated material that flow very rapidly down steep-sided channels. In the case of the 2005 Matata event, boulders, logs and other debris were carried by the flows, which also swept away cars and even whole buildings, although fortunately no-one was killed. The material eventually spilt out along the coast where it was deposited to form a large fan-like sediment deposit.

To help understand the complex pattern of sediment deposition, the researchers compared information obtained using a technique called Light Detection and Ranging technology (LIDAR) before and after the 2005 event.

“LIDAR uses the time taken for reflected light to return from objects or surfaces to determine the range, in a similar manner to radar. It can be used to monitor coastal evolution, and to identify and precisely measure landform changes resulting from geological events such as landslides,” explained Helen Miller, who worked on the project during her MSc project, and is now a PhD student at Southampton.

Based on LIDAR, eye-witness accounts, field investigations and aerial photographic surveys, the researchers estimate that debris flows sourced in the Awatarariki stream transported at least 350,000 cubic metres of debris.

The researchers were able to map the sediment flow paths in detail, along with changes caused by the clear-up operation and the creation of man-made levees after the debris flow event. Their observations show that the final shape of the debris fan, as well as spatial differences in make-up and consistency, were largely influenced by existing physical features such as sand dunes.

“The use of LIDAR for debris flow hazard analysis is still in its early days, but it has the advantage of giving a synoptic view over a large area” said Bull. “Ours is one of the first studies using ‘before and after’ comparisons of LIDAR data to assess changes in coastal morphology.”

Helen Miller was supported by the University of Southampton (Richard Newitt Bursary) and the Society for Underwater Technology (Educational Support Fund).

Image: An aerial photograph (18 May 2005) showing the debris flow from the Awatarariki Stream. The emergence of the Awatarariki Stream onto the flat coastal plain is visible, as is the lobate boulder train. This photograph was taken before any remediation activity and is a good record of the immediate aftermath of the debris flow. Large boulders were limited to the area between the line of the buildings and the base of the hill. Fine debris was deposited as a debris flood in the foreground, forming small lobate fan structures.