King crab distributions limited by temperature in the Southern Ocean 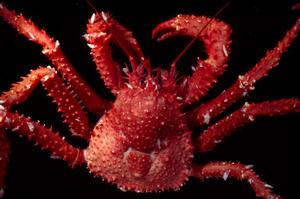 Invasions of voracious predatory crabs due to global warming could threaten the unique continental-shelf ecosystems of Antarctica, according to newly published findings.

“King crabs are ecologically important predators and form the basis of economically significant commercial fisheries,” said Dr Sven Thatje, an evolutionary ecologist at the University of Southampton’s School of Ocean and Earth Science (SOES), which is based at the National Oceanography Centre in Southampton.

Thatje and graduate student Sally Hall studied how water temperature influences the distributions of king crab species in the Southern Ocean, which has some of the coldest waters on Earth.

King crabs are cold blooded, their body temperature being determined largely by that of the surrounding environment. Although many of them live in cold, deep-sea habitats, experiments have shown that their larvae fail to mature in water temperatures below around half a degree Celsius, even after only brief exposure.

“We tested the hypothesis that the king crab species of the Southern Ocean only thrive above a critical minimum temperature and that it is this thermal barrier that determines their biogeographical distributions in the Southern Ocean,” said Thatje.

To do this, Thatje and Hall carefully studied the distribution of seventeen species of king crab living at depths between around 500 and 1600 metres in the Southern Ocean. They collated data from published records, museum collections, commercial fishing records, and reports from scientific research cruises. They then compared these records to water temperatures measured at a range of relevant depths and geographical latitudes.

Consistent with their hypothesis, they found that king crabs occur mostly at locations where the polar water temperature is relatively warm. The coldest waters in which king crabs have been found are between 0.4 and 0.5°C in the Ross Sea, suggesting that this indeed represents a thermal barrier limiting king crab distributions.

In addition, the records showed that only two species are endemic to waters south of 60 degrees South, suggesting that particular physiological and reproductive adaptations are required for life in the most extreme environments.

The researchers found that gaps in king crab distributions largely coincide with regions of low water temperature, although there are some anomalous absences yet to be explained.

Their findings imply that even relatively small increases in water temperature due to global warming could lead to king crabs moving into new areas.

“Rapidly increasing water temperatures observed along the West Antarctic Peninsula could allow king crabs to spread from the slope of the peninsula to the continental shelf itself,” explained Hall.

This could have considerable ecological consequences. King crabs are voracious predators that crush and then feed on their prey, but they and potentially competing predators such as sharks and rays and other predatory crustaceans are largely absent on the high-Antarctic continental shelves.

“The worry is that the sudden appearance of a new predator with few competitors could threaten isolated shelf communities such as those of the Bellingshausen Sea on the west side of the Antarctic Peninsula,” said Hall.

The researchers believe that their study provides a baseline against which future changes in the distribution of king crabs expected under global warming can be compared.

The study was supported by the Total Foundation (Abyss2100), the European Union’s Sixth Framework Programme (FP6) Marine Biodiversity and Ecosystem Functioning (MarBEF) project, and by the Natural Environment Research Council.