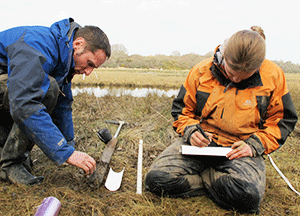 A recent study has shown there is regional variation in sea-level change on the eastern and western North Atlantic and therefore no single site is representative of the ocean-wide trends.

Using core samples from a salt marsh on the Newtown Estuary on the Isle of Wight, the sea level for the last 300 years was able to be recorded by scientists and compared to other salt marsh and long tide-gauge records to examine spatial and temporal variability in sea level change in the North Atlantic.

Called ‘Contrasting records of sea-level change in the eastern and western North Atlantic during the last 300 years’ by A.J. Long, N.L.M. Barlow, W.R. Gehrels, M.H. Saher, P.L. Woodworth and R.G. Scaife, the scientific paper has been published in the journal Earth and Planetary Science Letters. The study was funded by a grant from the UK Natural Environment Research Council.

The National Oceanography Centre’s Professor Phil Woodworth, one of the co-authors of the paper, said a record such as this is especially important because most other long salt marsh records (sometimes called ‘proxy sea level records’) are from the American coast where there are a number of pristine, large marshes that can provide data for 1,000 years or more.

“These American records may be good ones but have been used in several studies as if they were globally representative, which is clearly not the case. They suggest an acceleration in the rate of rise of sea level towards the end of the 19th century which is of great interest for climate studies.

“In particular, they have been used in ‘reconstruction exercises’ in which relationships are established between past global temperatures and the rate of sea level rise, thereby allowing a prediction to be made of sea level in the future given an assumed temperature rise, which one can take from the Intergovernmental Panel on Climate Change 5th Assessment Report, for example.”

By contrast, Professor Woodworth said this new Isle of Wight record, and others from the European coast with which it has similarities, do not suggest as strong an acceleration as the American records. The implication is that the American acceleration is not as globally-representative as thought by some other authors, possibly due to spatial differences in sea level change in the last few hundred years because of the changing ocean circulation, and therefore some sea level rise predictions may not be as reliable as thought.

To read the full paper, ‘Contrasting records of sea-level change in the eastern and western North Atlantic during the last 300 years’ published in Earth and Planetary Science Letters, 388, 110–122, 2014. See www.sciencedirect.com/science/article/pii/S0012821X13006468.