Human impacts on the deep seafloor 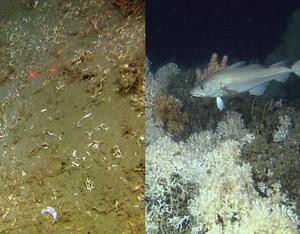 This information is crucial for conservation of seafloor ecosystems.

The deep seafloor covers approximately 60% of Earth’s surface, but only a tiny fraction of it has been studied to date. Yet as technology advances and resources from relatively shallow marine environments are depleted, human impacts on the deep seafloor are likely to increase.

“Information on the location and spatial extent of human activities affecting the deep-sea environment is crucial for conservation of seafloor ecosystems and for governance and sustainable management of the world’s oceans,” said Angela Benn of the National Oceanography Centre, who led the new study.

The researchers focused on the OSPAR maritime area of the North East Atlantic, where human activities are particularly intense. The area covers over eleven million square kilometres, about 75% of which is deeper than 200 metres, and includes important fishing grounds such as those of Hatton and Rockall.

Using available data for the year 2005, they mapped and estimated the spatial extent of intentional human activities occurring directly on the seafloor as well as structures and artefacts present on the seafloor resulting from past activities.

They looked exclusively at the physical footprint rather than the consequential ecological effects of disturbance, contamination and pollution, which are harder to ascertain. One difficulty that they faced was that of accessing data on human activities that was accurate, up to date and comprehensive, and in a suitable format for analysis.

“Some governments, public organisations and private companies were far more forthcoming with information than others,” explained Benn. “Significant improvements are needed in data collection and availability, and this requirement needs to be built into international conventions and treaties with a legal framework in place to ensure informed environmental management.”

Despite difficulties and various uncertainties, the researchers’ assessment suggests that, although now banned, previously dumped radioactive waste, munitions and chemical weapons together have the lowest physical footprint of the human activities considered, although they do not consider potential dispersal after leakage.

Non-fisheries marine scientific research also has a relatively small footprint, whereas those of fisheries marine scientific research, telecommunication cables and the oil and gas industry are moderate. However, even on the lowest estimates, the spatial extent of bottom trawling is at least ten times that for the other activities assessed, with a physical footprint greater than that of all the others combined.

The study estimated the total area of physical imprint in 2005 to be around 28,000 km2. However many human activities in the deep sea are concentrated in certain areas, particularly in shallower depths between 200 m and 1500 m, and in particular habitats which become disproportionally impacted. The OSPAR area comprises many different habitats each with different and diverse ecosystems. The percentage impact in each of these habitats would provide important information but unfortunately there is virtually no detailed seabed mapping to provide this information.

As demands drive human activities ever deeper the imprint will become more widespread. “Consequently,” argues Benn, “there needs to be a much greater understanding of the relative impacts of human activities on the deep seafloor, and in particular how these activities affect seafloor ecosystems and biodiversity.”