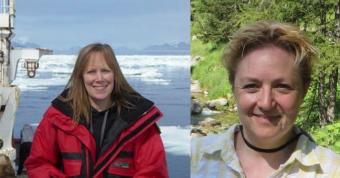 Two NOC scientists, Dr Penny Holliday and Dr Christine Gommenginger, were awarded the title of Honorary Professorial Fellow from the University of Southampton for their personal achievements and contributions to the Research agenda of the University.

The title recognises a portfolio of work in Education, Research or Enterprise and marks a national and international reputation deriving from a sustained and continuing track record of excellence in their areas of activity.

Dr Christine Gommenginger is a physical oceanographer who specialises in new and improved observations of the ocean from space. She leads and fosters innovation in many topics including sea surface salinity from space, ocean winds from reflected satellite navigation signals, surface current vectors with Interferometric Synthetic Aperture Radar and improved coastal sea level, wind and waves with satellite altimetry. She has strong interests in innovative Earth Observation technologies and is actively driving the definition, development and demonstration of new spaceborne sensors and future ocean missions. Her work features extensive multi-disciplinary collaborations across academia, industry and government, nationally and internationally, including partnerships with key stakeholders in the space sector, notably Airbus Defence & Space Ltd and Surrey Satellite Technology Ltd.

Commenting, Christine said: “I am honoured and thrilled by the recognition this award gives to my research in satellite oceanography and the opportunity it brings for closer cooperation with colleagues across the University”.

Dr Penny Holliday, Leader of Ocean Circulation and Processes, is a physical oceanographer whose research has focused on the circulation and variability of the subpolar North Atlantic, and the role of the ocean in our changing climate. She has participated in 21 seagoing expeditions, several as Chief Scientist. Penny is the UK principal investigator for an international programme researching the Atlantic meridional overturning circulation strength, variability and mechanisms (OSNAP). She holds the role of Science Coordinator for CLASS, a world-leading UK Atlantic science programme supporting national and global strategic needs.

Penny serves on an expert group for the International Council for the Exploration of the Seas, is a member of the Scientific Advisory Board of the French Oceanographic Fleet, and a UK representative in EuroGOOS and GO-SHIP. She supervises graduate students and coordinates a UK early career scientist fellowship scheme to fund access to berths on research expeditions and visits to research centres.

Penny joined the Institute of Oceanographic Sciences Deacon Laboratory in 1990, initially working as a project manager for a global, multi-national research programme, and later combining that role with her research. She was awarded PhD from Liverpool University in 2002, and worked part-time at the NOC from 2003 to 2016, before returning to full-time work as a senior scientist.

Commenting on the award, Penny said, “I’m very proud to be awarded the title of Honorary Professorial Fellow from Southampton University because it brings recognition of my research and leadership achievements and potential. I’m excited to work closely with the University to develop more opportunities for Southampton students to gain experience working at sea and within research centres.”

Congratulating the recipients, Professor Ed Hill, Executive Director of the National Oceanography Centre said, “I am delighted that Penny Holliday and Christine Gommenginger have been awarded Honorary Professorial Fellowships by the University of Southampton, which recognise the excellence of their scientific contributions respectively to climate linked ocean circulation processes and to satellite oceanography.”