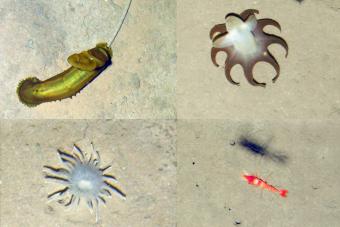 A study led by National Oceanography Centre (NOC) scientists, recently published in Frontiers in Marine Science, presents the first ever images of animals living below 4000 metres within the Exclusive Economic Zone (EEZ) of the Republic of Kiribati, a remote island group in the Pacific.

Industry-collected seabed photos revealed a high diversity, but low abundance, of complex animals. The majority of the observed seabed life was single-celled giant forams. This is comparable to similar deep-water areas nearby, including the Clarion-Clipperton Zone (CCZ), which is of significant commercial interest for polymetallic nodule mining.

Deep-sea exploration within Kiribati’s waters was stimulated by the creation of the Phoenix Islands Protected Area (PIPA) in 2008, which is one of the largest Marine Protected Areas in the world, encompassing 408,250 km2. These missions primarily focussed on the impressive deep-water coral communities associated with seamounts on the shallower slopes of the Phoenix Islands. However, there has been almost no biological assessment of the deep abyssal plain areas within the region; the only known sample collected at such depth in the area was a single dredge sample collected during the Challenger expedition in 1875. Consequently, very little was known to date about the abyssal habitats in this region, and so even preliminary opportunistic observations are of value given the close proximity and geomorphological similarity of the Kiribati EEZ to the Clarion Clipperton Zone (CCZ).

NOC scientist, Dr Erik Simon-Lledo, lead author of the study, said: “The results of this study are best considered as preliminary baseline observations of the Kiribati abyss, and as such, these should guide the generation of conservation strategies and biological survey designs to be conducted within this region in the years to come”.

John Parianos of Nautilus Minerals, who was Chief Scientist on board when the data were collected in 2015 during a vessel transit to the CCZ, added: "It is great to see the results of this industry-academic-government collaboration come to press. We would also like to acknowledge the excellent marine operations by our contractors Yuzhmorgeologiya and Fathom Pacific, and of course the assistance of the Government of Kiribati".

The Republic of Kiribati is a Pacific Micronesian small island state comprised of three island groups, the more populous Gilbert Islands in the West, the largely uninhabited Phoenix Islands in the middle and the Line Islands to the East. Although the total land area of Kiribati is only 811 km2, the EEZ covers around 3.5 million km2, and about 90% of this area is below 4000 m water depth.

The study is the result of a collaboration between the NOC, the Ministry of Fisheries & Marine Resource Development of Kiribati, and Nautilus Minerals; it is funded within the Commonwealth Marine Economies Programme, which aims to enable safe and sustainable marine economies across Commonwealth Small Island Developing States.