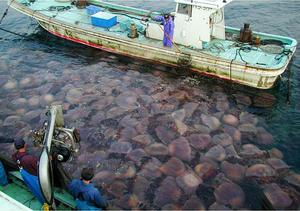 A global study has questioned claims that jellyfish are increasing worldwide.

Blooms, or proliferation, of jellyfish have shown a substantial, visible impact on coastal populations – clogged nets for fishermen, stinging waters for tourists, even choked intake lines for power plants – and recent media reports have created a perception that the world's oceans are experiencing increases in jellyfish due to human activities such as global warming and overharvesting of fish. Now, a new global and collaborative study questions claims that jellyfish are increasing worldwide and suggests claims are not supported with any hard evidence or scientific analyses to date.

Dr Cathy Lucas, a marine biologist at the University of Southampton, who is based at the National Oceanography Centre, Southampton was involved in the study, which appears in the latest issue of BioScience (BioScience manuscript # 11-0051.R1). Her co-authors are comprised of experts from the Global Jellyfish Group, a consortium of approximately 30 experts on gelatinous organisms, climatology, oceanography and socioeconomics from around the globe, that includes co-principal investigators Dr Rob Condon, marine scientist at the Dauphin Island Sea Lab (DISL) in Alabama; Dr Carlos Duarte of the University of Western Australia’s Oceans Institute and the Instituto Mediterráneo de Estudios Avanzados (IMEDEA) in Spain; and Dr Monty Graham of the University of Southern Mississippi (USM).

The Global Jellyfish Group conducted their work at the National Center for Ecological Analysis and Synthesis (NCEAS), a cross-discipline ecological and data synthesis research centre affiliated with the University of California, Santa Barbara, USA.

Increased speculation and discrepancies about current and future jellyfish blooms by the media and in climate and science reports formed the motivation for the study. “There are major consequences for getting the answer correct for tourism, fisheries and management decisions as they relate to climate change and changing ocean environments,” says Dr Carlos Duarte. “The important aspect about our synthesis is that we will be able to support the current paradigm with hard scientific data rather than speculation.”

The study highlights the centrepiece of their research collaboration with NCEAS – the formation of a global database called the Jellyfish Database Initiative (JEDI) – a community-based database project that is being used in the global analysis and to test the worthiness of the current paradigm. The database consists of over 500,000 data points about global jellyfish populations collected from as early as 1750, and will be made as a future repository for datasets so that the issue of jellyfish blooms can be continually monitored in the future.

By analysing JEDI, the group will be able to assess key aspects behind the paradigm including whether current jellyfish blooms are caused by human-made actions or whether we are simply more aware of them due to their impact on human activities, such as over-harvesting of fish and increased tourism. “This is the first time an undertaking of this size on the global scale has been attempted but it is important to know whether jellyfish blooms are human-induced or arise from natural circumstances,” says Dr Condon. “The more we know, the better we can manage oceanic ecosystems or respond accurately to future effects of climate change. The scientific data exists to answer this question, but it is fragmented in analysis”.

The global analyses using JEDI are currently underway with an anticipated finish date of spring 2012.